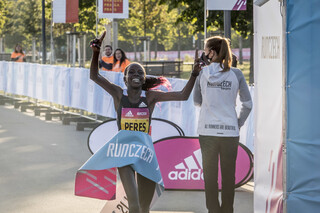 Peres Jepchirchir (KEN) set a new women-only world record time of 1:05:34 in the women’s race at the Prague 21.1 km – Ready for the Restart on 5 September.

She finished 93 seconds (500m) ahead of second-placed Brenda Jepleting (KEN) who had started the race as a pacemaker. In the men’s race Kibiwott Kandie (KEN) ran 58:38 – the sixth fastest time ever and fastest this year – but was 37 seconds outside Geoffrey Kamworor’s year-old world record of 58:01.

Nine women, including two pacemakers, started the race at the climatically-favourable time of 06.20 on a flat, 1.28km oval lap course in Prague’s Letná Park. Pacers Brenda Jepleting and Lilian Jepkorir Chebii led out the first 5km in 15:20, Jepchirchir broke away from field at about 6.5km and durged through 10km in 30:32. She slowed in the final laps and she fell short of what she later said she had hoped for: “I was thinking to run maybe 1:04:50, but.. [over] the last five kilometres I was really tired,” she said, but added that she had planned to run much of the race alone.

Back in February 2017 Jepchirchir had broken the half marathon world record in a mixed-sex race by running 1:05:06 at the Ras Al Khaimah Half Marathon but her time was surpassed two months later.

The men’s race followed at 08.00 in much warmer conditions and drew out a similar solo effort from Kandie. He led from 10km and beat his own 2020 world leading time of 58:58, set in the Ras Al Khaimah Half Marathon at the end of February. “My wish is to run again when this pandemic is over,” he said. “It will be a pleasure to continue competing.”