A half marathon with a rich history, in a city with even more heritage

Take it to the bridge 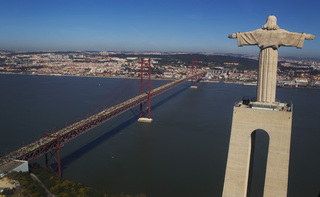 The first Lisbon Half Marathon in 1991 had 3973 finishers. Thirty years later the number of participants is almost 20,000, half of them foreign runners. The flat course along the banks of the Tagus makes the race one of the fastest half marathons in the world and also takes runners on a tour of the city’s best sights and views.

The race offers participants the unique opportunity to run on the emblematic 25 de Abril Bridge. The course follows towards the beautiful streets of Alcântara near the river, passing by the famously busy street of Av. 24 de Julho. The race goes by one of Lisbon’s most busy and ancient railway stations: Cais de Sodré, after that athletes will return and run towards Belém, the finish line is at one of the most famous landmarks in the country, the Jerónimos Monastery.

For dedicated runners the race offers the opportunity of a new PB. For casual participants it affords the chance to run in a joyful environment and the guarantee of breathtaking views. Runners come from 90 nations and the event has an economic impact of more than four million euro (4.7m USD) for the city. The race is broadcasted live for more than 200 million people all over the world.

Since the second edition a fun run has taken place simultaneously. This year it was intended to make it into a timed 10km race but because of COVID-19 this new “Vodafone 10K” and the main 30th anniversary competition were both postponed to 2021. A special “spinning medal” was ready to reward athletes on 22 March but will now be handed out on the new date of 9 May 2021.

The Briton Paul Evans (1:01:44) and home favourite Rosa Mota (1:09:53) won the first race. Rosa remains the only (female) winner of the competition – not too surprising because the world’s best runners are invited. In 1998 Antonio Pinto finished in 59:43 and in 2000 Paul Tergat improved the course record to 59:05 but at that time the course was not record-eligible.

The Sikh centenarian Fauja Singh (who became the oldest person to have run a marathon) participated in the 2006 Lisbon Half.

In 2008 the elite start was moved to make the course record-eligible and Haile Gebrselassie (59:15) won the men’s race which carried the IAAF Gold Label for the first time. The 2009 race was enlivened by the traditional South African dance group Zulu, demonstrating the cultural diversity of the event.

In 2010 the Lisbon Half celebrated its 20th anniversary with a world record as the Eritrean Zersenay Tadese ran a time of 58:23 which remained unbeaten for eight years.

Olympic champions such as Gelindo Bordin and Stefano Baldini; Haile Gebrselassie, Tegla Loroupe (6-time winner) and Derartu Tulu were just some of the top athletes who ran in the Lisbon Half. To mark the 25th anniversary in 2015 several of them were invited to celebrate the 25th anniversary race. Gelindo Bordin, Zersenay Tadese, António Pinto and Rosa Mota did a studio photoshoot and let themselves be photographed in a very fun mood with Carlos Moia.

Mo Farah (GBR) won that race in a European record of 59:32. On the day before the race he helped the Portuguese sports secretary and Carlos Moia inaugurate a statue in honour of athletes.

In the 2018 edition “Storm Felix” forced the organisers to move the mass start from the Bridge. The wind was the main opponent for elite and non-elite runners alike and foiled a planned attack on the world record (worth a 50,000 euro bonus) by Zersenay Tadese.

Lisbon is one of the five world’s leading half marathons that partnered to create the new international running series SuperHalfs. It was launched in September 2019 but due to Covid-19 will only start in 2021.

Lisbon is an historical city with stunning beaches, a welcoming culture and rich gastronomy. Good weather brings tourists and running enthusiasts alike flocking to its coast. Europe’s sunniest country is also the birthplace of Fado, a mournful music genre infused with melancholia, which forms part of the Portuguese identity and is included in the UNESCO “Intangible Cultural Heritage” list. The capital has stupendous cultural attractions, good food and wine – and a unique bridge to cross.