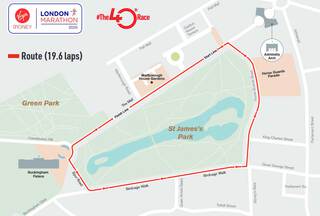 “The 40th Race” London Marathon on 4 October 2020 will consist of separate women's, men's and wheelchair races on a 2135m (clockwise) lap around St James’s Park in Central London finishing on The Mall in the same spot as every year since 1994.

The flat course on a high-quality surface, along with the usual loaded fields in both men’s (Eliud Kipchoge vs Kenenisa Bekele) and women’s (Brigid Kosgei vs Ruth Chepngetich) races makes world records a realistic possibility. It will be the first opportunity for runners to achieve the Olympic qualifying standard since the qualifying period re-opened on 1 September.

The coronavirus hygiene plan is to create a “biosecure bubble” for which athletes must be tested in their home countries before departing four days before the event, again on arrival at their hotel, and again on the Friday before the race. Any athlete who tests positive will be withdrawn. The hotel will be with single room occupancy and located out of town with private grounds in which runners can train.