Distance Running 2020 Edition 4 > Running into history > For the record

by Gerd Steins and Horst Milde 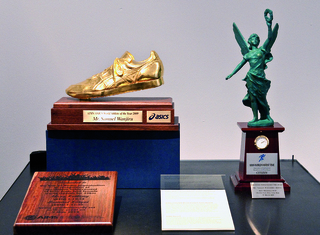 When the sport of distance running broke loose on the streets of New York in 1975 and then spread rapidly throughout North America and Europe few people stopped to think about what was happening – they were too busy living the moment or, as it turned out, living the era.

It took time for that to change but in 1994 Berlin Marathon race director Horst Milde proposed the establishment of a ”Museum of Running” in Berlin under the supervision of AIMS. Berlin was fertile ground for such an initiative and had already hosted several exhibitions about running over the previous decade.

The third AIMS World Congress had taken place in Berlin in September 1985 in parallel with the Berlin Marathon. An exhibition on running was to be on display in the shop windows of a well-known Kurfürstendamm department store in the finish area of the Berlin Marathon. Requests for items to be loaned were sent out all over the world from April 1985 and Gerd Steins penned a concept for the exhibition.

In the end the exhibition could not be held but the donations received were used for the 1987 exhibition “From the Knights’ Tournament to the City Marathon”. There was not yet a significant pool of running artifacts so about 95% of the exhibited objects were borrowed.

Two days before the official reunification of Germany (on 3 October 1990) the East German sports collection was transferred to the Berlin Sports Museum. It had a library stock that filled 110 linear metres and included 72,772 sports photographs and negatives, 6000 documents and. 8800 other artifacts.

From the 17th Berlin Marathon in 1990 to the 20th Berlin Marathon in 1993, the Berlin Sports Museum presented small exhibitions of posters, running objects and works of art at the Marathon Expo. Berlin is especially a city of running; with the first cross-country and road races initiated around 1900 long-distance running found an important home in Berlin and many initiatives for German and international running originated there. The Berlin Cross-Country Run (since 1964) and the Berlin Marathon (since 1974) successfully continue the tradition. The Berlin Sports Museum’s philosophy therefore naturally reflects a museum of running.

The first major running exhibition: ‘From Cross-Country Run to Berlin Marathon’ was organised in the Berlin State Archives from 19 September to 7 December 1994. It was this exhibition which led to Horst Milde’s approach to AIMS.

The Berlin Sports Museum was confirmed as the AIMS Marathon Museum of Running at the Congress in Macau on 6 December 1994. The history of running in Berlin had founded an international collection site which AIMS has supported ever since.

The alliance with AIMS has been very successful: In January 2008 an AIMS delegation visiting the Berlin Sports Museum/AIMS Marathon Museum of Running was impressed by the work being done and began to support it financially. Since then the Museum has continuously received running artifacts of all kinds from all over the world and has become a magnet for marathon experts and enthusiasts the world over.

On 21 January 2015, the word Marathoneum and a runner’s logo were trade-marked on the Forum for Sport History at the German Patent and Trade Mark Office. In future all activities of the Berlin Sports Museum and its sponsoring association Forum for Sports History regarding the national and international history of running will be under the umbrella brand Marathoneum. The Marathoneum is simultaneously a collection, archive, publisher, organiser and promotional agent for all forms of running.

Over the last 25 years the Museum’s holdings on the history of running have been continuously expanded. The Marathoneum now includes about 2500 posters, 1500 T-shirts, 2200 finisher medals and 1600 accreditation cards from races around the world. In the library there are more than 95 German and English-language running magazines. The total stock of the collections is deposited and recorded according to museological rules.on about 340m of shelves in two large deposit rooms in the Berlin Sports Museum

Special treasures of the museum include the extensive English language collection of Dr. David Martin (Atlanta/USA): the collections of Henryk Paskal (Poland); Wim Verhoorn (Netherlands); Werner Sonntag (Germany); as well as the estate of the four-time marathon winner Max Wils (Berlin) and many unique pieces from Olympic Games, World Championships and German Championships from East and West.

Since 2016 the Marathoneum has been providing information about the most important acquisitions in English with the “Marathoneum Documents”. These are published for the AIMS Marathon Symposium held at the Athens Marathon in November every year.

By the end of 2019 the library had about 110,000 artifacts of various kinds, the photo archive had grown to about 1.5 million sports photographs and negatives and the library now extends over 1170 linear metres. Since 3 October 1990 running materials of all kinds have been solicited in a targeted manner and have been collected since 2015 under the umbrella of the Marathoneum.

Due to the pandemic the exhibition “Keep on Running” is closed until further notice and will be rebuilt. Extensive collections of objects from Athens and Paris have been promised for the Marathoneum, which will be incorporated into the new exhibition.