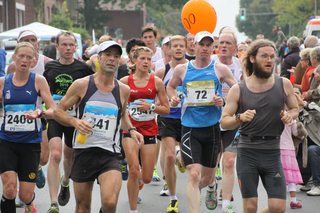 “Volksbank Münster Marathon – it’s a bit different this year” is the motto on Sunday, 20th September.

This was the originally planned date for the 19th edition of the popular Volksbank Münster Marathon in Germany. Due to the coronavirus pandemic, the organising team had already announced its cancellation at the beginning of July. Since then, almost all large marathons in the autumn have been abandoned, in the hope that by next year normality will have returned.

The date will not pass without some running being done, though. The organisers are calling on runners to get moving on 20th September in a VMM-themed outfit: an old or current promotional t-shirt, a finisher shirt or whatever the creativity of runners allows.

People can run in Münster, in the surrounding area or wherever they happen to be. Runners in Münster might well encounter many others with the same idea, perhaps also the organisers and Münster celebrities. Of course, the current social distancing rules are to be followed at all times.

The most creative photographs of the day, which should be posted on Facebook or Instagram by 27th September, could win interesting prizes. Those who do not use social media can also send their picture to info@volksbank-muenster-marathon.de. The winners will be notified by the end of October.

The Marathon’s homepage is already accepting registrations for next year’s race.

See the latest news from Volksbank-Münster-Marathon