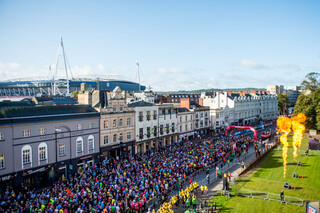 Now one of the biggest and most exciting half marathon races in Europe, the Cardiff University Cardiff Half Marathon will return on Sunday 28 March in 2021 after the 2020 version was postponed from this October due to the Coronavirus pandemic.

The March event will be the first of two editions of the Cardiff Half in 2021, with the second taking place on Sunday 3 October 2021.

The race, one of the UK’s largest running events, is hosted in the Welsh capital and attracts 27,500 runners from all corners of the globe. Thousands of spectators turn out to cheer on the runners in a city that is renowned for its sporting passion. Expect a roaring atmosphere to help you along your way to the finish in the heart of the city’s magnificent Civic Centre.

Starting beside the iconic Cardiff Castle runners journey through a beautiful city and its outskirts including waterside views in Cardiff Bay and a picturesque loop of Roath Park Lake towards the end of the race. Runners will pass by historic Cardiff landmarks including the Norwegian Church, Wales Millennium Centre and other innovative architectural buildings which have all played a fascinating role in the history of the city.

With a predominantly flat and fast course entrants for the March edition of the 2021 Cardiff University Cardiff Half Marathon can target personal bests. The race attracts world-class athletes across men’s, women’s and wheelchair fields and has hosted the World (2016) and Commonwealth (2018) Half Marathon Championships. Race weekend also incorporates the Cardiff University Festival of Running which gives families and runners of all abilities the opportunity to get involved in the action with a choice of shorter, family-oriented races.

The March edition of the race sold out in a few months but you can still register and make your miles mean that much more with an official charity place. The Cardiff Half is one of the biggest fundraising events in the UK with more than £3m raised for local and national charities each year. You can see a full list of official charities at www.cardiffhalfmarathon.co.uk/charity

A second edition will take place in 2021 on the usual early October date (Sunday 3). Entries are already on sale at www.cardiffhalfmarathon.co.uk