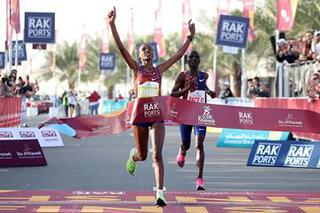 Ababel Yeshaneh’s world half marathon record of 1:04:31 has been ratified by World Athletics.

Yeshaneh smashed the world record at the Ras Al Khaimah Half Marathon on 21 February, slicing 20 seconds off the previous record of 1:04:51 set by Joyciline Jepkosgei in Valencia in 2017.

Yeshaneh ran close to marathon world record-holder Brigid Kosgei from the outset, as the latter lead through 5km in 15:07 and 10km in 30:18. Yeshaneh took the lead soon after the two passed 15km (45:38), eventually covering the second 10km segment in 30:54 before forging on to a commanding victory.

“I didn’t imagine this result,” said Yeshaneh, whose previous best of 1:05:46 had stood as the Ethiopian record for a five-month period between 2018 and 2019. “I am a world record holder!”