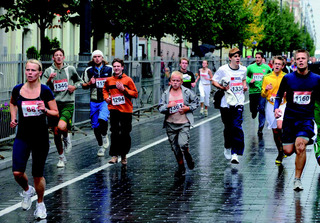 The fifth edition of international Marathon race in Vilnius happened to be the first one run under rainy conditions.

After a hot and humid first two weeks of September autumn fell suddenly this year. The change in the weather prevented the fun run from attracting record participation, but was welcomed by many of those running the longer distances.

The record field for the half marathon and the full distance divided into nearly equal parts. Altogether over five hundred runners gathered to await the same gun signal at 11.00. From the Cathedral Square the route took them past many touristic highlights on the way, including, Castle hill, the old Arsenal, the Church of St. Ann, the headquarters of the Lithuanian National Olympic Committee, the 400-year old University and a recreational area with luxurious residences of the newly wealthy.

Vilnius was established by Grand Duke Gediminas in 1323. According to legend, he camped for a night at the confluence of the Neris and Vilnia rivers when hunting for aurochs (predecessors to domesticated cattle which became extinct in 1627). The Grand Duke had a dream in which an iron wolf appeared, roaring loudly. This was explained by prophets as an omen to establish a strongly-fortified new settlement that would become famous.

The last pagan territory in Eastern Europe, Lithuania later became properly Catholic and the capital was famous for masterpieces of baroque architecture. You can count seven churches without leaving the route of the fun run around the Old City – and the marathoners may double check that.

As an extra bonus, the Vilnius Marathon claims to have the closest finish line to the geographical centre of Europe. In 1989, specialists from National Geographic Institute of France calculated the centre of continent by applying the scientific method of gravitation centers. The monument marking its precise location stands only 26km to the North and makes another visitor attraction.

With the patronage of the City municipality runners were kept secure from traffic by innumerable policemen on duty along the course. The Lithuanian Athletics Federation seized the opportunity to organize a national championship within the race. This did not mean any lack of foreign runners – 18 different nations were represented. Most visitors came from neighboring Latvia and Poland, but “low cost” airlines have discovered the capital of the largest of the three Baltic States, and Vilnius is marketed as a fresh weekend destination for westerners.

Local running celebrity Zivile Balciunaite, who finished 11th in the women’s Olympic Marathon in Beijing, appeared for the first time in a home race and seemed happy with just half of the classic distance. It took as much time for her to run one loop as it did for her to finish signing T-shirts and photos afterwards.

The local running club “Sviesos Kariai” (“Warriors of Light”) brought spirit to whole event. They recruited teams of pacemakers to help slower runners pace themselves to target times of 3:30, 4:00 or 4:30, and they encouraged spectators to compete for a “warmest support team” nomination.

The support was very welcome in the cool weather. Sponge stations looked sad, without very many takers among the runners. The drink tables seemed too generous when only half of the initial field headed out for the second loop. The course is not completely flat, but it could easily be a lot more demanding in a city spread over so many hills. It is also very green and makes a fantastic training route on a sunny day.

Splendidly attired wedding parties, cut off from their transportation by the marathoners, could be seen hurrying on foot to be at the appointed church on time. Organizers suggested that this was perhaps the last chance to capture pictures of “runaway brides”, as next year the race is scheduled for the Sunday, not Saturday.

In covering the final three kilometers through the Old City, it is not easy to ignore the appeal of one of the street bars, and join a table to take a glass of the local brew. Especially if you are running behind one of the 4:30 pacesetters, who did exactly that, accepting an offer from one of his fellow “warriors” who had already completed his task. But just minutes later the sight of the Belfry tower appears down the avenue, and the finish gantry waits just around the corner.

After giving up the chip and putting the commemorative medal on your neck it is time to refill and celebrate. At that moment no dish from the local cuisine is too rich for a proud finisher.