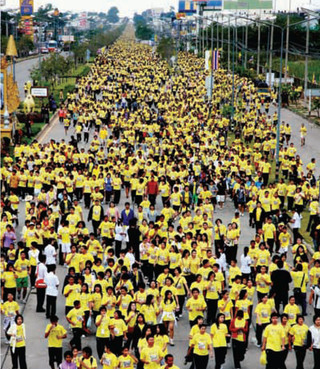 Khon Kaen is a town of 150,000 people located 400km north-east of Bangkok, and has long been famous for silk weaving, dinosaur remains, sticky rice and spicy papaya salad, but it is now cultivating a new reputation as the “Marathon City” of Thailand.

The Khon Kaen International Marathon has been held at the end of January for the past five years and is increasing in size and status with each edition.

Race morning this year turned out to be around 4ºC warmer than for the previous year’s event, yet it was still reasonably cool for this part of Asia. There was also a brief early morning sprinkle of rain for the 588 marathon runners as they prepared for their 04.30 start at the front of Khon Kaen University. The marathon route made a circuit of the city, with dawn arriving shortly after competitors passed the impressive nine-storey temple by the lake to the south of the city. Since the roads were all closed to traffic until the last runner had gone through, the run north through the city centre and along the ring road was a safe one.

After passing beside paddy fields full of bright green rice seedlings, the course headed slightly up and back towards the university. The last 5km was on a mainly downwards slope through the treelined roads of the university. Although there are no really prominent hills in the area, many runners noted after the race that few parts of the course are actually flat. Runners were buoyed along by students manning the frequent water stations, cheering, playing drums and waving flags to represent and welcome the twenty plus different nationalities of the runners taking part.

A full range of events from 4km fun run to the Marathon, each offering trophies and prize money for many different categories of finisher, attract participants from across the world. The strong community involvement evident along the course is another attractive feature of the race. Thousands of local residents and school children from neighbouring provinces ran the mini marathon (11.55 km), many of them doing so barefoot.

The half marathon start time and course were designed so that runners heading out to the half way point could be inspired by the sight of the lead group of mainly Kenyan and Ethiopian marathon runners heading for home in the opposite direction in a parallel lane. This same section of road boasted a stage with local singers, especially for the benefit of the runners. Local families also got involved by setting up tables with slices of watermelon at different points along the route.

The mini marathon runners made a circuit around and through the university, finishing in the same place as the other two longer events and thus benefiting from the same access to food and the much appreciated massage services. Finishers of all the three main events received the now-traditional weighty medal to commemorate and celebrate their efforts.

The Marathon was well contested at the front, with Kenya’s Luka Kipkemoi Chelimo finishing less than 50 metres ahead of his compatriot, Geoffrey Kidrotich Birgen. Although many Kenyan entrants had not been able to make the journey due to the troubles in their country at that time, they were still well-represented and took nine out of the first 10 places. The first Thai runner to cross the line was Kordair Senmood in 13th place with a time of 2:35:15.

Thai women made an exceptionally strong showing, sweeping up eight of the top 10 prizes, including first place. Two hours into the race Norah Cheptoo from Kenya was leading the group but, following a strained hamstring, she dropped back to achieve an eventual fourth place. Sunisa Saylomyen, who had never been far behind, came through to win ahead of last year’s winner Wioletta Uryga from Poland. Sunisa was building on her win at the South East Asia (SEA) Games just six weeks previously (and she went on to run 2:48 in Hong Kong on 17 Feb).

The Kenyan and Ethiopian runners dominated again in the men’s half marathon, taking the first six places. An exciting last few hundred metres resulted in only three seconds separating Robert Kosgei of Kenya and Mekonnen Emiru from Ethiopia. The previous Thai marathon champion, Boonchu Chantorndesa crossed the line with his fellow countryman Amnuay Tongmitr in the same time (1:11:06) but Amnuay was awarded seventh place and Boonchu eighth, based on a 0.01 second difference in their times.

Tenth place went to a new competitor, Hem Bunting, from Cambodia. Mostly self-motivated and self-trained, he now lives in the office of the Khmer Amateur Athletics Federation (KAAF) along with his running mate, Cheng Chandara, who also ran in Khon Kaen and placed in the top 50 in the half marathon. Hem Bunting had recently competed in the SEA Games marathon, bringing home a silver medal for his national record breaking time of 2:26. Khon Kaen International Marathon provides a great opportunity for Cambodian and Lao athletes, for whom one of the biggest challenges is a lack of domestic, or otherwise affordable, race opportunities.

In the women’s half marathon event, the first three runners reached the half way point shoulder to shoulder before Saifon Bunchaeng of Thailand pulled away to win.

The ever-popular 4km fun run was held on a separate route, going 2km up and back on the airport road from the south gate of the university. As in 2007, over 30,000 people took part, making for an impressive sight, especially since most of the participants wore the official yellow race T-shirt which represents the provincial flower of Khon Kaen. Some people raced the whole way, others strolled the course along with their pets, while most did something in between, in an effort to win one of the 20,000 finishers’ medals.

By mid morning the post-race entertainment, consisting of different local and Chinese dances and the now customary cobra show, had finished and the awards and cash prizes had been presented. Organisers were left to enjoy a well-deserved rest while contemplating how to build on this successful event for next year (25 January 2009).