Virtual mass race added to half marathon championships on 17 October 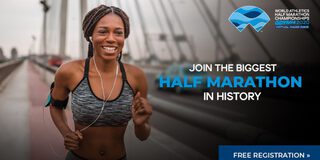 World Athletics and the Local Organising Committee of the World Athletics Half Marathon Championships Gdynia 2020 have launched a new initiative – a virtual mass race on 17 October, the same day as the world’s elite runners will compete for the championship.

The aim is to encourage runners all around the world to run a half marathon wherever they are on 17 October 2020.

“This does not mean that the ‘real’ mass race we have planned in Gdynia will not take place,” said Michal Dretich, Head of the LOC. “The virtual competition is an addition to our event.”

Intense efforts have been made to ensure the World Athletics Half Marathon Championships Gdynia 2020 – including the mass race – can be held in 2020. Final decisions will be taken by the end of August. However, amateur runners who have previously registered for the mass race in Gdynia can switch to virtual competition, keeping all the benefits from the real mass race, including an Asics t-shirt, an official backpack and a uniquely designed finisher medal.

The idea behind the virtual run is far more universal, involving the global running community. As the event’s official motto says: ‘All you need is running.’

Joining the virtual run is completely free – you only need to create an account on the specifically created online platform AllYouNeedIsRunning.com. Virtual runners can choose to add to their experience by purchasing a finisher medal, an ‘All you need is running’ t-shirt or other merchandise.

On 17 October all that is required is that each participant runs the same day, same distance, in any place and at any pace, so that the entire running world becomes part of the World Athletics Series event that will take place simultaneously in Gdynia, Poland.