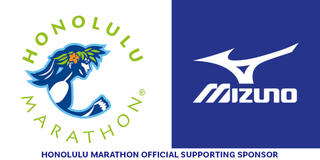 Mizuno has been announced as the new clothing sponsor of the Honolulu Marathon for the 2020 event – still scheduled for 13 December 2020.

The Japanese apparel specialist will provide all finisher, commemorative and volunteer shirts and sell official merchandise at the Honolulu Marathon Expo.

The announcement comes at a time when nearly all Japanese marathons previously scheduled for 2020 have been postponed to 2021 and some events in the first two months of 2021 are already being cancelled, most recently the Ubusuki Nanohara Marathon, planned for 10 January. There are no prospects for Japanese marathon runners below elite level to compete domestically for the rest of the year.

The Honolulu Marathon was first held in 1973 and is the fourth largest marathon in the United States. From inception it was hugely popular in Japan as it was the most available marathon for non-elite Japanese Marathon runners before the advent of mass marathons in Japan only 13 years ago. To date about 470,000 Japanese runners have raced at the Honolulu Marathon. The size of the Honolulu Marathon field dropped from 24,500 in 2006 to 20,000 in 2007 after the first mass marathon in Japan was held in Tokyo that year. For this year at least Honolulu Marathon may again stand out as the best chance for Japanese Marathon runners to race. Hawaii to date has had 1400 cases and 25 deaths. Although it has not yet waived its 14-day quarantine requirement such an announcement is anticipated.

“We are particularly proud to welcome such a premier athletic company at this difficult time,” said Jim Barahal, CEO & President of the Honolulu Marathon Association. “This demonstrates Mizuno’s long-term commitment to the people of Hawaii and Japan.”