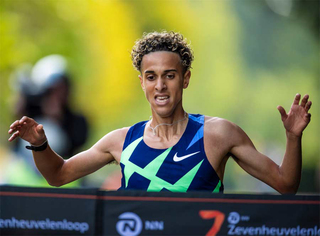 In the Dutch town of Nijmegen, the restrictions caused by the spread of the coronavirus were handled on 19 July by a run with a reduced number of participants and with the public largely excluded.

In a park on the outskirts of the city a select 20 athletes ran a distance of 5km on approximately a four-lap course. The run was staged by the organisers of the legendary 15km Zevenheuvelenloop and saw four national records recorded by the men. As with similar events in recent weeks the run was not announced in advance.

The top Dutch runner Maureen Koster (NED) was paced by Bram Som for the first two laps of the women’s race. Then she ran alone to win in 15:25. In Europe this year only Alina Reh was faster (15:22) at the Berlin 5km Invitational held a week earlier.

The men started six minutes later and a group of six ran 2:41 for the first 1000m and went through 2000m in 5:24. Only Qassim Oumaiz, Mike Foppen (NED) and Noah Schutte (NED) were ahead at 3km after a fast kilometre of 2:39. Soon afterwards Oumaiz broke away to win in 13:19. The 23-year-old Spanish runner with Moroccan roots made a tremendous final sprint for the European record of 13:18 set in February by the Frenchman Jimmy Gressier, but fell one second short.

The time of the winner was a new Spanish national record. Mike Foppen in 13:31 and David Nilsson (SWE) in 13:42 set national records for the Netherlands and Sweden.