Running together restores feeling of fun in Vienna 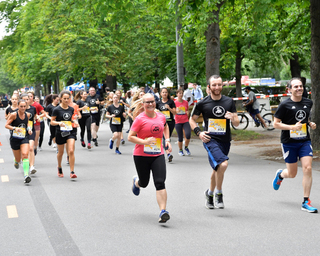 It was smaller than usual, with new rules, but it was finally a “real” run again.

The VCM Pop-up-Run over 5km and with 250 runners was held in the evening of 15 July in the Prater as the first popular running competition in Vienna after a break of several months.

Dividing runners over several starting time slots created a special mood. The word “finally” was on everyone’s lips: finally the joy of running together, coming together, being allowed to crossing the finish line or cheer for others. It was a re-discovery of people doing the same thing and having fun doing it.

“Hardly ever have we looked forward to an event as much as we did today,” said Vienna City Marathon managing director Gerhard Wehr. “We created a concept for this run so that – with responsibility and the common sense of the runners – we could carry out an event that is fun for the participants. Coming together for a common sport is simply beautiful and the core of what we do. You can see this all the more clearly when events still cannot take place due to Covid-19.”

Because several start time windows were used the results were open until the end. The atmosphere grew until the final run, especially thanks to the Cheering Zone of the adidas Runners Vienna.

The runners were obviously in good shape. This fits with a survey of runners from 139 countries, which showed that during the period of the strictest coronavirus conditions people ran more than they had before. Runners who had previously been active once or twice a week recorded significantly higher training volumes. Many of them have probably discovered running for the first time and have also developed a desire to participate in competitions.

No more than 64 participants were allowed per slot, who were free to choose their starting time. This way there was a very relaxed and contactless starting process. For the starting grid there were markings at a distance of one metre on the main avenue. The Covid-19 rules were sent to all participants in advance by mail and were displayed on signs on site. The members of the organising team wore mouth and nose protectors and, in areas such as the drinks counter, gloves. The event concept was approved by the authorities, so that a small event could be organised.

“We would like to thank all helpers, runners and fans who created a great atmosphere and followed the Covid-19 rules with sensitivity and common sense,” said the organisers. “We want to motivate you to keep running so we are already planning the next VCM pop-up run this summer.”