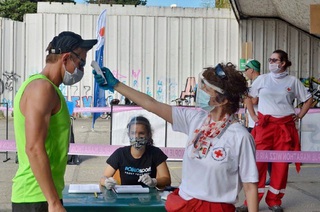 With the relaxation of rules on social gatherings in many European countries distance running events are again being held – but in a very different format. One such race is described in detail below – the HalkEco Hronometar (time trial) 10km held on 20 June organised by the Skopje Marathon in Northern Macedonia.

In order to start 360 runners under social distancing rules individual start times at 30-second intervals had to be booked between 06.30–09.30. Registration and payment had to be done online through www.smartrace.club and closed when the 360 places available had been taken. The start was under a bridge and the out-back course followed a broad path along the river with a turn point at 5km.

The bib numbers incorporated a time chip and were delivered before the race to each participant’s postal address. On race day runners were instructed to come, in their running gear and with their race number on, to the start zone at most ten minutes and at least five minutes before their booked start time and wearing a protective face mask. All those in the start area had to maintain 2m distance from each other. There was no bag drop provided.

Four 3m x 3m boxes were marked out before the start line. The name and number of the competitor was read out as a signal for them to move into the first box where thermal screening was conducted. In cases of an elevated temperature the competitor was not allowed to start the race. Hands were disinfected as each box was vacated by the previous competitor, On reaching the 3rd box the runner removed the protective face mask and disposed of it in the trash bin. Reaching the 4th box, the runner waited for the start signal.

There were medical teams at two points on the course and water stations at 3, 5 and 7 km, plus at the finish. Overtaking other runners was allowed during the race, but with special care to keep clear of all race participants and passers-by. After crossing the finish line the runner disinfected their hands, took a bottle of water from a table, and from the next box collected their medal from a rack. He/she then received a protective mask to wear as they left the finish area for home.

Results and awards were posted live on the race website and on www.tagtiming.mk. There was no award ceremony. The winners were announced online, with photos from the race. It was extremely important that each runner understood and agreed to abide by the special rules set out and that grouping both before and after the race was avoided.