A Japanese runner describes first race in the city for months 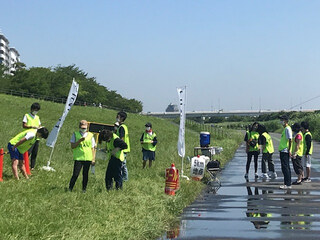 On 21 June the 22nd Smile Marathon was held along the banks of the Arakawa River on the northern edge of Tokyo.

It was the first road race I’ve gone to since the corona situation started. The start and finish were at Ojima Komatsugawa Park. It was organized by Dan Communications Co. Ltd.

There were a wide range of distances on offer: 30 km, half, 10 km, 5 km and a 3 km family run. One of the operational goals this time was to avoid large crowds of participants, so bib pickup times were staggered for the different divisions. Staff wearing face shields measured participants‘ temperatures, then people had to fill out a checklist on their physical condition. They then picked up their bib numbers and participation goods from a tent where staff were behind a clear plastic sheet.

There were no official changing rooms or baggage storage facilities. Participants were responsible for that themselves. The race organisers did offer storage for valuables, but items had to be sealed inside a plastic ziplock bag first. Instead of doing it all at once like before, each race division had separate opening ceremonies and guided warm-up stretches to minimise the number of people assembled at one time.

The half marathon was the first race of the day. Runners lined up at the start in rows according to marks placed on the ground in regular intervals. They didn’t have to wear masks during the race itself, although everybody did the rest of the time. The course was a scenic out-and-back 5 km circuit along the banks of the Arakawa River. Finish times were taken by hand. Finisher’s certificates were to be mailed later, so there was no award ceremony and people dispersed pretty quickly after they finished. Overall, the operation succeeded in avoiding dense crowds of people at the start and finish.

What I saw was a post-corona road race taking the steps necessary to deal with the virus issue. What was really noticeable was that the already-existing premise in race operation of both the race management and participants understanding the rules and working together to conduct the race extended smoothly into the countermeasures against the coronavirus.

These measures cost the organisers more in terms of both labour and money. I think participants will find them less convenient compared to how things used to be. But the only way for races to go forward given the current situation in which we find ourselves is for mutual agreement between race organisers and participants to accept them. I’m glad I saw it for myself.