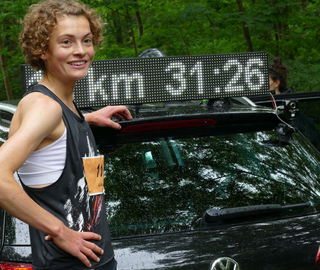 Some high-class 10km races took place in the first months of 2020 but then came the covid. After three months of struggling through ‘lockdown’ the ‘Berlin 10km Invitational’ run on 8 June has become the first race worldwide since the start of the pandemic to produce internationally relevant times.

Women’s winner Alina Reh posted the seventh-fastest time of the year. The only other top distance run that has taken place since mid-March has been a 5km race in Stavanger (NOR) where Jakob Ingebrigtsen set a national record of 13:28 over 5km.

To ensure that the current corona rules were complied with in the Berlin pilot project ‘Return of the Road Run’ the organisers did not announce the race in advance. Local media also knew nothing about it so there were almost no spectators along the course.

The race took place in the southeast of Berlin on a completely flat asphalt forest road. Eight men and seven women started along with pacemakers. The men started two minutes ahead of the women and the individual starting positions were fixed so that there was a 2m distance between the runners.

The set-up was an out-back route on a course well protected from the wind by the forest setting. There were a total of three turns over the entire distance, at 3km, 5km and 7km. The course was officially measured in advance and judges from the Berlin Athletics Association took times.

The ‘Berlin 10k Invitational’ was put on by Mark Milde, race director of the Berlin marathon, Christoph Kopp, elite athlete co-ordinator for the Frankfurt marathon and Helmut Winter, who implements lead vehicle time displays for the elite runners in many major international races.

Athletes and coaches were grateful that, after so many cancellations, Berlin took the initiative and a run could take place.

“It was a nice experience to be able to run a race again. I am happy with the time, although I originally wanted to achieve a result in the range of 31:00 minutes,” said Reh. “I hope there will be more races.” She was paced through 5km in 15:45 and ran the final kilometre in 3:02.

Second-placed Katharina Steinruck (32:41) missed her best time by just two seconds after having driven from Frankfurt to Berlin at short notice to be able to take part. “Everything was well organised,” she said. “We were well shielded and some waiting drivers even cheered us on. I hope that this race has set an example and motivated others to do something too. We saw in Berlin today that it is [again] feasible to run a road race.”