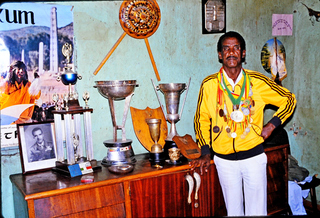 The Olympic Games held in Mexico City in 1968 were more dramatic than most.

The city was erupting with protest. Inside the stadium there were the ‘Black Power’ salutes. There was technical change as well: it was the first Olympics to be held on an all-weather track and the high jump was revolutionised by the ‘Fosbury Flop’. It was also the first – and so far only – Olympics held at high altitude – the effects of which had already been seen in fast sprint times and Bob Beamon’s stratospheric long jump.

One thing that looked like it might not change was the Marathon. The Ethiopian Abebe Bikila had sensationally won gold in the 1960 Rome Olympics and defended his title with a new world record in Tokyo four years later. He started as the race favourite based both on his past performances and his preparedness for racing at altitude – a factor which had wrecked the aspirations of race favourite Ron Clarke in the 10,000m held a week earlier.

Bikila’s countryman Degaga “Mamo” Wolde was also in that race. His Olympic experience had started before Bikila’s with appearances at the 1956 Melbourne Olympics in the 800m, 1500m and 4×400m relay. Aged 36, two months older than Bikila, he had focused on running longer distances since the early 1960s.

Because of the altitude the early pace in the 10,000m was cautious and four runners remained together with two laps to go. Wolde was one of them and took the lead with a lap to go. The Kenyan Naftali Temu chased and caught Wolde on the final straight to win by half a second.

On a warm, sunny afternoon 75 runners from 41 countries lined up at the Plaza de la Constitucion for the start of the Olympic Marathon. As in the 10,000m a cautious start led to a large leading group but by 20km only six remained, and Bikila was not among them. He had sustained a stress fracture after arriving in Mexico City but still started the race. He dropped out at 17km after having informed Wolde of his intention. By 20km Wilde and Temu were both in the lead group of six. Temu went ahead at 25km but Wolde took the lead at 30km and went on to win by over three minutes as former world record holder Kenji Kimihara came through to take second behind him.

Wolde was born on 12 June 1932 in the Oromia region of Ethiopia to the south of Addis Ababa. Despite coming from different areas both he and Bikila moved to the capital In 1951 and joined the Imperial Guard. Wolde served as a peacekeeper in Korea from 1953 to 1955.

He missed competing in the Rome Olympics where Bikila had scored his sensational victory. Perhaps partly due to both these facts Wolde began to concentrate on longer distances. He won high-profile international cross-country races in Spain in 1963 and 1964. In the Ethiopian Olympic Marathon trials on 3 August Wolde qualified by finishing just 0.4 seconds behind Bikila, with his brother Demissie finishing third to also make the Ethiopian team.

In Tokyo Wolde came fourth in the 10,000m but dropped out early on in the Marathon. As Bikila sailed away to a largely uncontested win in a new world record of 2:12:12 Demissie finished 10th in 2:21.25

With his own victory in the Mexico Olympic Marathon four years later Wolde extended Ethiopia’s streak to three in a row and now possessed an enviable Olympic record of a gold, a silver and a fourth place – but he wasn’t done yet.

At the 1972 Olympic Games in Munich, aged 40, Wolde took third place in the Marathon in 2:15:08 behind Frank Shorter and Belgium’s Karel Lismont. He became only the second person (Bikila was the first) to win medals in successive Olympic marathons.

Wolde’s last notable marathon win was in the All-Africa Games in 1973. He withdrew into the ranks of the military as junior officers seized control of the government in the form of the ‘Derg’ junta. During the time of the Derg (1974–1991) he served in a neighbourhood-level committee but was also allowed to coach runners.

After the Ethiopian People’s Revolutionary Party (EDRP) overthrew the Derg Wolde was arrested in 1993 and accused of being involved in an execution during the Derg dictatorship. He admitted being present but denied participating in the killing. An international campaign for his release started from 1995 which seemingly had little effect. Eventually though, in early 2002, he was convicted and sentenced to six years’ imprisonment but was released because he had already been held in jail for nine years.

Just a few months after his release Wolde died of liver cancer on 26 May 2002, aged 69. His grave lies in Saint Joseph’s Church Cemetery in Addis Ababa, next to that of Abebe Bikila.