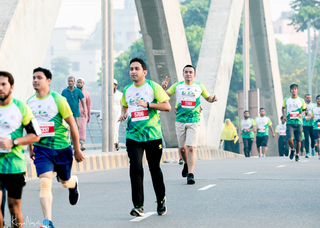 On 13 March 2020 a starter’s pistol ushered in a new era of running in Bangladesh.

Beside the beautiful Lake Hatirjheel in the nation’s capital city of Dhaka the CCCL-RUNBANGLA International 10K got underway as 1400 enthusiastic runners made history winding their way around the lake. It was a beautiful cool morning as the sun rose on a new dawn for running in Bangladesh.

The newly-formed sports organiser, RUNBANGLA International LLC, staged the first ever AIMS member event in Bangladesh, using the first internationally certified course in the country. A flag had been planted.

RUNBANGLA founder Jon Michael Boka, a New York architect, began travelling to Bangladesh for professional reasons in 2011. As a lifelong runner he seeks races wherever his travels take him. “Over the course of a few years I saw that Bangladesh was changing,” he said. “Its economy was surging and the time felt right for Bangladesh to join the international running community. It’s an exotic location with a rich culture, history, natural beauty, youthful entrepreneurial energy and an incredibly generous people.”

For their first race RUNBANGLA teamed up with the Cadet College Club Ltd (CCCL), one of the most esteemed private clubs in Bangladesh, as the title sponsor. RUNBANGLA’s mission is to create multiple running and sporting events for adults and children, connect with domestic charities and promote issues concerning climate change and the environment – especially critical in this low-lying country.

“We were surprised by the overwhelming support shown to our organisation,” said Boka. “AIMS helped us a lot and several leading race directors gave us great advice on how to set up a world class race in a country new to the international running world stage.” But the local response was even more impressive: “We received support from local government, business sponsors, local and international runners and groups. Without their help we never would have been able to get the race onto the road.” From the time the course was measured and certified in December 2019 the RUNBANGLA team had three months to their race date but, with local and international endorsement, it was achieved.

The first race was a great success. Thousands of participants shared pictures and posts of their experiences and looked forward enthusiastically to future events. “The entire community is excited about this new milestone,” said Hossain. “Runners have a new standard for what to expect from a race.”

On 20 November 2020 the RUNBANGLA Half Marathon will be held at the same venue. This event includes a certified half marathon course, a 7.3km fun run and several children’s races to offer an inclusive, family-friendly community for all runners, from the serious to the casual. The influence of RUNBANGLA is already being felt as the three-year old Dhaka Half Marathon, organised by BD Runners and Dhaka Run Lords, have subsequently applied for AIMS membership and expect to have a new AIMS event by 2021.

While many of Bangladesh’s best athletes travel abroad to compete the country is also home to several dedicated grass roots running communities. The oldest and largest running group, BD Runners, was formed in 2011. This group has connected running enthusiasts of all levels and continues to sponsor community races, open training runs and to inspire other smaller groups throughout the nation to bring running to their communities.

But perhaps what grabbed national attention most was when Shamsuzzaman Arafat, an avid runner and Ironman competitor, ran his solo 1000km Great Bangladesh Run in 2017 to promote the health and fitness of the running lifestyle. He remarked: “[running] is a mind game and a test of one’s self-confidence. People can do everything if they try with confidence.” This credo has served as an inspiration for many local runners to this day.

Geopolitically Bangladesh is a relatively young country, having achieved its independence in 1971. Today it is the world’s eighth most populous country and has one of the fastest growing economies in the world. Bangladesh Prime Minister Sheikh Hasina, who among the leaders of the world’s fifteen largest countries is the only woman, has been praised for her leadership and the economic growth under her tenure.

For the international runner who chooses to visit Bangladesh there are many things to do and see. Access is eased by visas granted on arrival to visitors from many countries – but do check before you make plans. There are several travel companies that can arrange your trip, one preferred travel partner is listed on the www.run-bangla.com website.

Dhaka has over 20 million residents, and a lot of traffic, so staying near the race course at Lake Hatirjheel is advisable. The Gulshan business district, about 2km from the race course, is where you will find first-rate international hotels, restaurants and shopping. We recommend using a local tour guide to see the sights of Dhaka including the world-famous National Parliament House designed by Louis Kahn, the Bangladesh National Museum, Old Dhaka City, Dhaka university and much more.

If you have time you might want to catch a one-hour domestic flight to Cox’s Bazar in the southeast coastal region. There you’ll find the longest natural sand beach in the world with many picturesque fishing villages along with several top-notch resort hotels and delicious local cuisine. If you’re lucky you might even glimpse an elephant; or if you travel to the western mangroves of the Sundarbans one of the 400 or so remaining Bengal Tigers.

RUNBANGLA’s first event came just days before the Covid-19 pandemic shut down the globe. In response Boka shared RUNBANGLA’s hope for the future: “As the world struggles with this crisis I believe our best action as individuals is to support our communities and those suffering around us as best as we can, while planning for a positive future. 20 November 2020 is the date for the RUNBANGLA Half Marathon in Dhaka. We will deliver this event with the greatest care following all regulations for the safety of all our runners. If an alternate date is required, we will be prepared. We hope to see you there!”