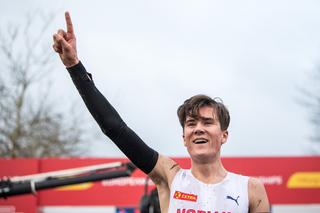 Jakob Ingebrigtsen (NOR) ran 13:28 to win a 5km road race in Stavanger on the evening of 20 May. The 19-year old Norwegian moved up to fifth place in the annual world best list.

That the race took place at all generated international interest. Norwegian television NRK aired it live and it was streamed worldwide on the Internet.

Despite the coronavirus crisis the local organizer “Arrangerklubben Spirit” put on a race that largely complied with the applicable rules during the pandemic and could be a pioneer for similar runs. It was a race for Norwegian elite athletes and started in groups set off at intervals.

The starting line-up allowed for minimum distances between the runners but during the race smaller groups of athletes formed who ran relatively close together. Some photos showed hardly any difference to leading groups in traditional road races.

Jakob Ingebrigtsen ran nine seconds inside the Norwegian record on with a time of 13:28. One of Jakob’s older brothers, Henrik Ingebrigtsen, came second with 13:32 – a time that was faster than the previous national record. Per Svela was third in 13:40.