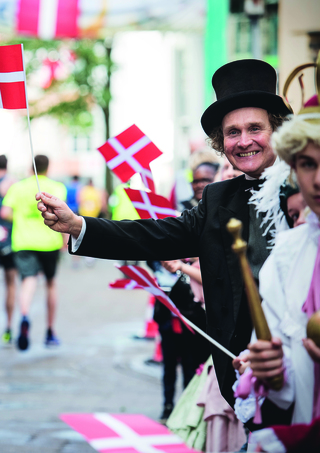 The H C Andersen Marathon in Odense has just about the flattest route in the world. It is also among those marathons with the cleanest air. This is truly a fairytale marathon.

The City has a history of more than 1000 years. There are cosy streets in the old town and in the modern part shopping areas, cafés and restaurants calling you for a cappuccino or a great meal.

The first H.C. Andersen Marathon took place in 2000 with around 2000 participants. This year 6000 participants are expected to run the half and full marathon as well as 10km over the final part of the course.

The race is named after the Odense’s foremost son: the writer Hans Christian Andersen. He is famed for fairytales such as The Little Mermaid and The Ugly Duckling. At each kilometre sign you will see characters from his stories and you might even spot H.C. Andersen himself cheering for you on the route. The finisher medal also tells a story: each year a new Hans Christian Andersen fairytale is featured on the medal, while the race number is hidden in his portrait on the reverse side.

In addition to all the enchanting fairytale the countryside around Odense is as flat as a pancake and makes the marathon course one of the fastest anywhere. It’s ideal for runners looking to beat their personal record or running a marathon for the first time. “On average our runners finish the marathon in 3:51:22,” says Race Director Erik Mogensen.

The start and finish of both marathon and half marathon are at the Odense Sports Centre about 2km from the city centre and most of the hotels. Runners complete the last 300m of their race on the stadium track. The Sports Centre area also houses the Expo, changing facilities, and entertainment throughout race day.

Marathon runners do two laps of the half marathon route. With several spots in close proximity in the City Centre it is possible for friends and family to cheer for you several times during your race. On the second lap a small detour takes you to the newest addition to the city’s infrastructure: Odin’s Bridge.

“In 2017 we decided to make it possible just to run the last 10km of the race. It turned out to be such a great success that we continued with ‘Run the last 10K’. It gives families and running clubs with runners of different ability the option to participate on the same day”, says Mogensen.

H.C. Andersen Marathon is co-operating with the city’’s hotels so if you are travelling from abroad to participate in the run you can get a good deal for your stay in Odense.