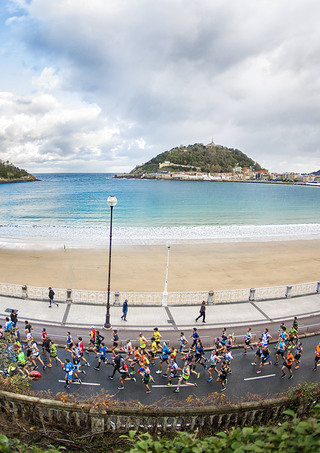 San Sebastian is a synonym for enjoyment. Recognised worldwide for its beauty and gastronomy, it is known as the ‘Pearl of the Cantabrian Sea’. The town is also ideal for running and the San Sebastian Marathon is one of the best in the world. It is the second oldest in Spain after Madrid, both of them having started in 1978.

The race is not as crowded as other marathons held in big cities. There are around 3500 runners in the marathon and 2500 in the half marathon. This year for the first time the 10km race will be held the day before, on the Saturday, and it usually attracts around 1500 runners. There are also children’s races for those aged 3–13 with different distances according to age. 1200 children usually take part.

San Sebastian has a great athletic background: Seb Coe won 800m gold here in the 1977 European Indoor Championship. Sergei Bubka set a world indoor pole vault record here of 6.10m. The town also hosts the International Cross Country every year, an event which holds its 65th edition this year and which hosted the International Cross-Country Championships back in 1955.

Thanks to the great course (which is flat and at sea level) and the perfect running temperature (averaging 11C in November) the race offers ideal conditions. The Marathon World Cup was held in San Sebastian in 1993 and has hosted the Spanish Marathon Championships on many occasions. The current Spanish women’s marathon record of 2:26:51 was set here by Ana Isabel Alonso.

Participants in the marathon complete two laps of a route which is practically flat and which passes by the three beaches that lie within the town. The Concha Beach has been named several times in the past few years as the best beach in Europe according to TripAdvisor users. Runners see this wonderful beach from just a few metres away several times along the route.

There is little pollution which also helps runners set personal best times. More than 65% of participants improve their PBs in this race which is officially timed and included in the calendar of the Spanish Athletics Federation. The race was given top grading by European Athletics as a Quality Road Race and it is fully committed to environmental protection and reducing waste.

San Sebastian is located in the Basque Country in the North of Spain and is just 20km from the French border. It welcomes thousands of tourists every year. More than 15 Michelin stars within a 25km radius testify to San Sebastian being one of the best places in the world to eat. Visitors on tighter budgets shouldn’t miss the famous tapas – locally called pintxos – which are offered by the many bars and restaurants in the Old Town.

Other attractions include the Kursaal Congress Centre, Victoria Eugenia Theatre, Miramar Palace, Buen Pastor Cathedral, Santa Clara Island, Igeldo Mountain – and the beaches. No doubt about it: San Sebastian is an ideal place to spend a magical weekend and take part in a top-quality race where marathon and half marathon participants will get a finisher medal and all participants receive the official T-shirt.