Skyscrapers of ‘Mainhattan’ are backdrop for Germany’s oldest city marathon 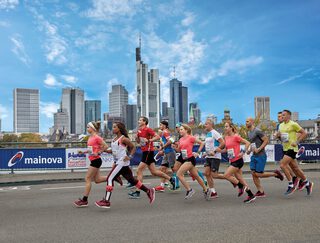 The key motif of the race is the view from the old bridge towards the glorious silhouette of the city of Frankfurt. But not just that: the course fast, the atmosphere along the course fantastic and the finish overwhelming.

Now in its 39th edition the Mainova Frankfurt Marathon offers a very special kind of running experience. The flat course is tailor-made both for elite athletes and mass runners to achieve personal bests.

It’s a magnificent run through the Opernplatz and among the skyscrapers. Runners get views of the Frankfurt skyline from a variety of perspectives. Music bands create an atmosphere where there is never a dull moment. Over 25,000 participants on race weekend – more than 15,000 of them in the Marathon itself – and hundreds of thousands of spectators come together to create Frankfurt’s biggest street festival.

Held on the last Sunday in October Frankfurt is the oldest city marathon in Germany. The “Gudd Stubb” or showpiece arena hosts what is probably the most atmospheric finish straight anywhere in the world. The place bubbles, comes to the boil and then overflows as the winners produce their finishing kick over the red carpet in the Festhalle to cross the finish line. The race has held a World Athletics Gold Label for the last eight years. In 2019 there were only 44 marathons worldwide which earned this award.

The race brings elite and mass athletes together on one stage. “We are a brand with worldwide reach and national and regional accents,” says race director Jo Schindler.

By Friday of race week the Marathon Mall in the Expo Centre is packed and is open right through to Sunday. It’s an El Dorado for active sports fans and for one weekend a year people in running shoes are everywhere around the Expo and Festhalle from where it is just a short walk to the start and finish.

Frankfurt is also Germany’s “greenest“ marathon. The organisers have earned this title with numerous innovative projects. Protecting the environment through waste management, energy efficiency and limiting CO2 emissions are a priority.

Runners can also participate as a member of a four-person team in the Generali Relay Marathon. You can do a warm-up the day before with a relaxed 5km in the Breakfast Run powered by InterAir, alongside some well-known names and with everyone in celebratory mood. The Schneider Electric Mini-Marathon and the Kids Race powered by Schneider Electric (for children from 5–17 years old) give the little ones the chance to cross the finish line under the bright lights of the Festhalle. The scenes there every year make for so many pictures in the family album. The 39th edition of the Mainova Frankfurt Marathon offers an unforgettable experience for the whole running family.