How far did you go, really?

For distance runners across the globe the COVID 19 lockdown has wrought havoc on their running routines.

Cancellation of races or only being allowed to run solo is the least of it. In the UK allowance is still made for daily exercise but in other countries like Italy, France and South Africa, exercise has either been banned or restricted to the immediate surrounds of the home.

The result has been the rise of the lockdown marathon. It may have started with French runner Elisha Nochomovitz who, having been prevented from running the Paris Marathon after its six-month postponement, ran the length of a marathon on his 7m balcony.

In South Africa, where exercise outside the home is completely banned, runners across the nation have signed up to the Mzansi Marathon, pledging to run 2km per day in order to achieve a marathon by the end of lockdown (or an ultra-marathon, should the lockdown be extended). Some South Africans have gone even further – Paul Eichert ran 100km in his backyard.

These efforts have highlighted a major problem that until now was perhaps less widely known: the very limited accuracy of running wearables.

Take the ‘balcony marathon’ and look at the sheer insanity of the record that Elisha got from his wearable and posted on Strava. If we were to believe the data then his balcony is a few hundred metres wide, spans several highways and includes elevation changes of over 20 vertical metres.

Colin Harper, a veteran of the Marathon des Sables, had carefully measured out and calculated his course in his back garden so as to run an accurate marathon, only to discover that his sports watch (brand redacted) had recorded him as running a full 10km short. 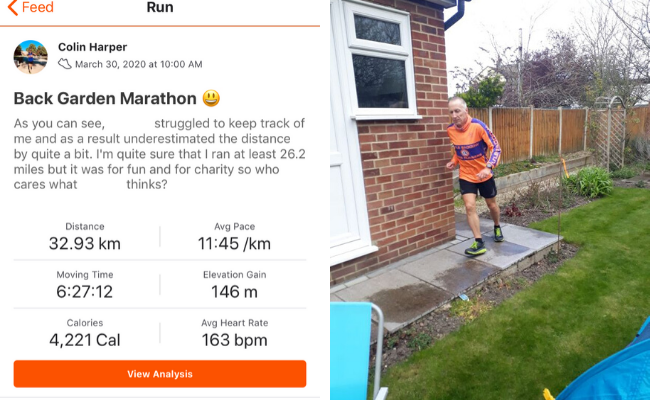 Beyond the frustrations and indignity of having your distance incorrectly recorded (get back out there and give us another 10km, Colin) accurate positioning really matters both for training and on race day.

The ability to run at a constant pace is a foundation of training and yet, without an accurate record of distance travelled, wearables are reduced to guesswork.

For Lars Rasmussen, one of the co-founders inventors of what became Google Maps (and now CEO of Weav.io which creates music to sync to runners’ cadence) it was about planning and performance. He ran the NYRR Staten Island half marathon last year. It was his first half marathon and he used his watch to get split time audio cues during the run.

“I wanted to break two hours and maintained an average pace of 9 mins per mile (3m/s) throughout the first 12 miles according to my app. But then, a few mins after the app told me I had hit 12.5, I noticed the 12-mile marker on the course. Suddenly realising I had more than a mile left when I thought it was less than half that totally floored me mentally. I had to walk-run a fair bit of that last mile and failed to make the two-hour mark as a result.”

There’s also the issue with where you are in the world, especially for fell-runners, where it can become an issue of personal safety. Colin Harper said:

“There are occasions when it is really important to be the right side of a hedge or ditch but the accuracy of GPS isn’t enough to indicate you are off-course by only a few metres. I have run several hundred metres on the wrong side of a hedge until the paths gradually diverged and I realised I was on the wrong one. I had no idea where I had missed the gap in the hedge, only that there was no way through where I was.”

Why are current fitness trackers so inaccurate? What’s really going on?

Running in confined spaces has shone a light on just how untrustworthy today’s wearables are in terms of reporting your location. Here’s why:

By watching the films posted by Nochomovitz, we can see that his balcony has a limited view of the open sky. What that means is that when his sports wearable is trying to get “GPS Ready”, i.e. to get a satellite fix, it only has a small portion of the available satellites to look at. With just a few satellites to fix on, and all in the same region of the sky, his device would expect a margin of error around 60m – hence the trace thinking that he was flying superman-style over the highway across from his balcony.

Take a look at the elevations reported on the Strava trace: apparently his balcony ranges from +13m to –19m in elevation. This is probably because of the poor GPS sky coverage and the barometer on his phone is getting confused by changes in temperature and pressure on the balcony – tricking it into thinking that he climbed the equivalent of 10 flights of stairs.

What can we do about it?

FocalPoint is a Cambridge-based start-up that has developed software upgrades for standard GPS chips to make them 10 times more accurate, especially in urban environments where signals get really messy.

Lockdown has created the constraints for FocalPoint’s engineers to test it in a similar way to the lockdown marathoners. Here’s a micro-version of Strava Art, running a heart-shaped trace in a 5×5m back garden. Here’s what it looks like on a major brand watch vs a Google Pixel equipped with FocalPoint D-Tail technology. Remember – this is run in a yard that is just 5m x 5m. 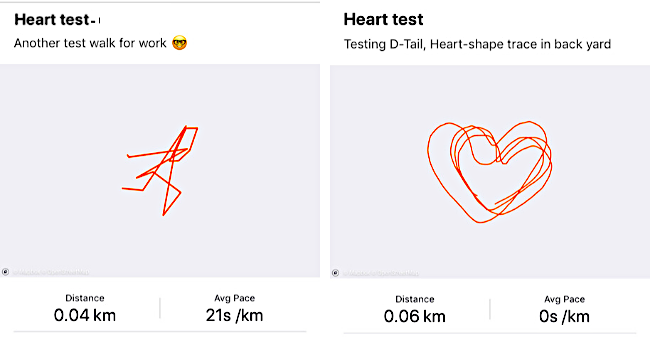 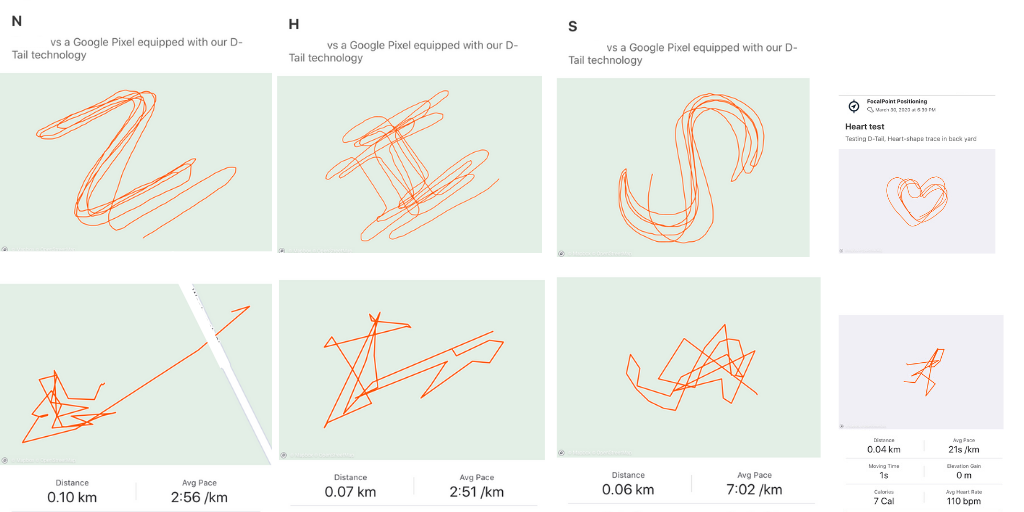 The much higher integrity trace is created by using a machine-learning-driven human motion model to get a true picture of how runners move through space, together with precise sensor fusion to get a true reading of elevation.

Combine that with FocalPoint S-GPS technology, soon to be available in some consumer-grade smartphones, and runners can expect a fix that is ten times better than today.

FocalPoint tech is currently trialing a number of sports wearables, and is expected to be available in smartphones from 2021.

What can you do about it?

Runners interested in getting a more accurate measurement of their run can join the FocalPoint trialist community by filling out FocalPoint’s demo request form .

Coaches, analysts and experts can email for more information.