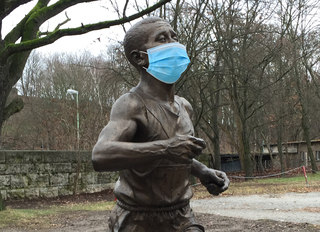 Statue of Son Kee Chung in front of the Berlin Athletics Association building near the Olympic Stadium.
Photo: Horst Milde

Over the weekend before Easter runner statues all over the USA sported a new look to show solidarity in slowing the coronavirus.

It began by accident on Saturday 4 April in Mystic, Connecticut when Amby Burfoot, Editor-at-large for Runners’ World and his wife and brother were out on a run and had the idea to place a face mask on the statue of 1957 Boston Marathon winner John Kelley in the town. Job done, Burfoot then realised that “I knew other runner statues, and I knew runners who lived near them. What if I could get all those statues to wear COVID masks?”

“Runners are among the healthiest people. We prize and appreciate our good fortune, and want to encourage the same in others. We’d like everyone to be healthy – to follow federal guidelines, both for exercise and for disease prevention. That was the thinking behind the Runner Statue-COVID-19 Mask movement.”

By the very next day the statues of Joan Samuelson in Maine, John Kelley (older and younger versions) in Newton on the Boston Marathon course, The Starter George V Brown in Hopkinton, Fred Lebow in Central Park in New York City, Bill Rogers (and another Joan Samuelson) in Davenport, Iowa, and Frank Shorter in Boulder, Colorado were all wearing the masks. In Maine and in Central Park police descended on the “masketeers” but after listening to the explanation volunteered to help.

By Monday Burfoot was seeking out volunteers to place masks on statues all over the world, targeting Harry Jerome and Roger Bannister and John Landy in Vancouver (CAN), Steve Ovett in Brighton (GBR), Paavo Nurmi in Turku (FIN), Yuko Arimori in Okayama (JPN), Spiridon Louis in Melbourne and in Sydney (AUS) and Son Ki Chung, 1936 Olympic Marathon winner, in Berlin.

Horst Milde adds: “All sports facilities were closed and the building surrounded by a high fence. I asked the caretaker if I could photograph the sculpture with the mask but he refused so I asked my graphic designer to create a mask for the Olympic champion and he did that on a photo I took some time ago.”