Stay extended by over a month with no end in sight 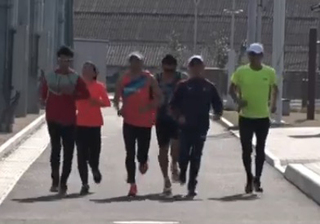 Having come to Japan to train in preparation for the 2020 Tokyo Olympics, the Mongolian national marathon team is still stranded with no way back to their home country.

The group of eight athletes and coaches arrived in Izumisano, Osaka on 9 February for a training camp.

Scheduled to return to Mongolia on 17 March the group was caught off-guard when flights between Japan and Mongolia were suspended due to the rapid spread of the novel coronavirus. After more than two months in Japan and nearly a month after their planned return date, a month that saw the Olympics postponed another year, there are still no prospects of them going home. All they can do is keep training with the support of local residents.

Located in the southwestern part of Osaka, Izumisano’s greatest landmark is Kansai International Airport. The number of planes taking off has been increasing, even as days are lost one by one to the state of emergency declared last week. But against that background, Mongolia’s best marathoners can still be found running in a park across the bay from the airport. Every day they are there, avoiding the crowds and close contact with others amidst the cool ocean breeze.

Izumisano was named host city for the Mongolian Olympic team in July, 2017. The city government is covering the costs of the longer than planned stay and providing help with issues from accommodations to nutrition to visa extension. A city official said, “I’m sorry to say that it doesn’t look like there will be any flights either way until this crisis is over. I don’t know what the future holds for them, but we will keep doing everything we can to support them.”

“I want to see my kids.” His young family is the main thing on 29-year-old Byambajav Tseveenravdan’s mind. Tseveenravdan had already secured his place on the Olympic team. At the 2016 Rio de Janeiro Olympics he staggered in to a 129th-place finish in 2:36:14, but at February’s Beppu-Oita Mainichi Marathon he ran a PB of 2:09:03. With this big step forward toward his second-straight Olympics behind him he planned to return home for a short time on 17 March but his way back was cut off when the Mongolian government blocked all international flights.

The government chartered a flight to bring Mongolians home, but due to the number of people Tseveenravdan and the others were unable to get seats. Nearly a month later, they are still waiting.

Even in April, the temperatures in Mongolia’s capital city of Ulaan Baatar can drop below freezing. If the marathoners were able to return home, they would be quarantined for over two weeks, interrupting their training. “I want to go home.” “I want to see my family.” They all share those feelings, but while stranded in a foreign land they keep doing what they can as athletes. “In Japan you can still run outside,” said one of the group’s support staff. “There haven’t been any cases of infection among the Mongolian athletes, and we want to keep it that way.”

There is still a year and three months until the Tokyo Olympics are scheduled to begin. To greet that day with a spirit of joy, Mongolia’s best marathoners are staying focused on overcoming all the uncertainties of today and tomorrow.