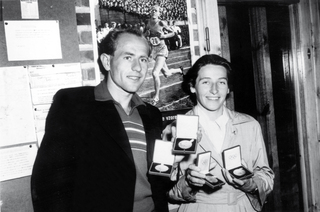 Dana Zátopková, gold medal winner in the javelin at the 1952 Olympics and former world record holder, died on 13 March aged 97.

She survived her husband, multiple gold medallist and word record holder in the 5000m and 10000m and Olympic Marathon champion in 1952 Emil Zátopek, by almost 20 years. Both were born on the same day – 19 September 1922 – and arguably also reached the height of their athletic achievement on the same day, 24 July 1952.

Zátopek had become Olympic 10,000m champion four days earlier and was contesting the 5000m as Zátopková was preparing for the Javelin final in which two Soviet throwers were heavily favoured. She heard the roar of the crowd acclaiming her husband’s victory as they passed each other on the infield and Zátopková took his medal in her bag “for good luck”. Luck or not Zátopková recorded an Olympic record 50.47m with her first throw, a distance no one else could match, and became the first Czech woman to win Olympic gold in any athletic event.

She went on to place 4th in the 1956 Olympics, set a world record of 55.73m in 1958 and to win a silver medal in the 1960 Olympics before retiring in 1962. Both Zátopeks suffered censure and separation after the “Prague Spring” of 1968. Although the Velvet Revolution of 1989 restored them to the national pantheon Dana spent the next 10 years caring for her husband whose health was failing. She continued to coach Javelin and followed the sport closely and also set up a half marathon event in her husband’s memory.