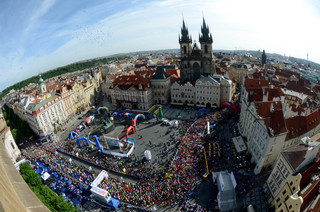 In the light of several race cancellations across the world due to the spread of coronavirus, other race organisers have reassured runners that they will go ahead with their events if at all possible.

RunCzech, organisers of the Volkswagen Prague Marathon due to take place on 3 May, said: “As of 5 March 2020 RunCzech is preparing the upcoming events as planned without any significant restrictions, since we have not received any signals to the contrary from the local authorities. The Czech Government’s current advice is that mass events should still go ahead. We are working hard to prepare a safe event involved while we keep monitoring the situation closely. The safety and health of participants, volunteers and the public are important for us. We are ready to act on any future advice by the Government of the Czech Republic, World Health Organization (WHO) and other public bodies.”

RunCzech has decided to implement additional preventive actions aiming to minimize possible risks for the participants, even though WHO stated that the overall risk is currently low.

Other races have also announced their intent to go ahead unless the situation changes dramatically.

The Almaty Marathon (KAZ) due to be held on April 19, announced its own intentions. “Currently, we do not plan to cancel the event. We continue to prepare for the competition. Approximately 95% of our participants are citizens of Kazakhstan, including foreign professionals working in our country,” said race director Saltanat Kazybayeva.

“We are responsibly following the recommendations of the Austrian Ministry of Health and the World Health Organization on the holding of major events,” said Wolfgang Konrad, race director of the VCM. There are currently no official measures in Austria to restrict events, the race said.

UPDATE: Since the first publication of this article the Almaty and Vienna marathons have been obliged to cancel their events.