All 30,000 marathon bibs sold and waiting list opened – Fewer than 1,500 places left for half marathon

Valencia Marathon sells out ten months ahead of event 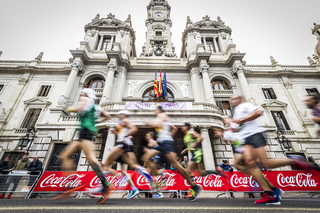 The Valencia Marathon Trinidad Alfonso EDP has sold all 30,000 race bibs for the next edition of the race, which will be held on the 6th of December 2020.

Thus the ceiling on runner numbers has been reached 10 months before the event and within just three months of opening entries for the race.

Like last year, the organisers will open a waiting list in a few days time so that those without entries can take up places, if and when these become available as entered runners drop out for whatever reason.

To mark its 40th anniversary, the Valencia Marathon raised the number of bibs available to 30,000 (5,000 more than in 2019), split into three equal tranches priced at EUR 60, EUR 80, and EUR 100 respectively. The first tranche of 10,000 bibs was put on sale on the day following the previous race. The bibs ran out in under 48 hours. The second tranche ran out just nine days later.

Last year, race bibs ran out almost six months before the race date. This is why the organisers – SD Correcaminos running club and Valencia City Council – decided to ditch the 10K Valencia Trinidad Alfonso so that they could offer more places for the Marathon. For the third year on the trot, race bibs have run out for the race which the Spanish athletics federation RFEA ranks as Spain’s best marathon by far. The race is also the first one to obtain World Athletics’ Platinum Label.

Those who have missed out on a race bib so far have one last chance to take part in this special, 40th anniversary of the Valencia Marathon. This chance takes the form of the hundred Platinum Bibs put on sale to celebrate the award of the World Athletics Platinum Label. This is a new way of taking part in the trial and includes a special charity quota for Save The Children — the Official Charity for 2020 — and many extras such as access to the VIP area, a post-race thermal poncho, participation in the Breakfast Run and so on.

The 20,000 bibs for the Valencia Half Marathon Trinidad Alfonso EDP (which will be held on the 25th of October 2020) are selling like hot cakes. The first tranche of 10,000 was sold out in December. Right now, there are still some 1,500 bibs available before we hang up the ‘sold out’ sign.

The Valencia Half Marathon is now part of the new SuperHalfs circuit, which brings together the best international trials over this distance. The launch of the SuperHalfs this year coincides with Valencia Ciudad del Running’s holding of the 30th edition on the 25th of October 2020.