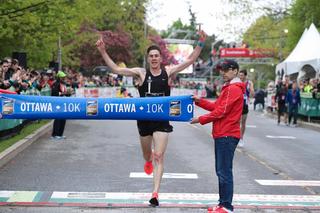 Organizers of the Tamarack Ottawa Race Weekend announced today they will be significantly increasing the overall prize purse for Canadian athletes in the Ottawa 10K event to CAD 35,000 (EUR 24,000) – the largest prize for any of Canada’s championship events this year.

The Ottawa 10K will also maintain its unique gender challenge whereby the women are given a head start, and whoever crosses the finish line first (man or woman) wins an extra CAD 2,000.

The event will also host the Canuck 10K Team Competition, where a Canadian elite runner will have the chance to pick 3 compatriots to form a co-ed team of four. The fastest team wins CAD 6,000 to be split evenly amongst the team, as well as an additional CAD 1,000 that will go towards the Scotiabank Charity Challenge participating charity of their choice.

Organizers also announced today they have elected not to renew their World Athletics (formerly IAAF) gold certification for the Ottawa 10K event, choosing to focus their resources on participant experience, the Canadian 10K Championships and the development of Canadian athletes. The organizers of the Tamarack Ottawa Race Weekend have, however, renewed the gold certification for the Scotiabank Ottawa Marathon.

Dylan Wykes, who won the men’s 10K in 29:56 last year, joins the organising team as its new Elite Athlete Coordinator, replacing Manny Rodrigues, who had been in this volunteer role for the past 20 years. Wykes said: “The road racing scene in Canada is on fire right now with records being set in all distances. I’m honoured and excited by the opportunity to work with Ian and the entire Run Ottawa team as the Elite Athlete Coordinator. I know I have big shoes to fill, as Manny has done an incredible job over the past 20 years building the elite athlete program. I’m looking forward to contributing to the Ottawa running community in a new way that doesn’t involve making my own two feet move fast”.