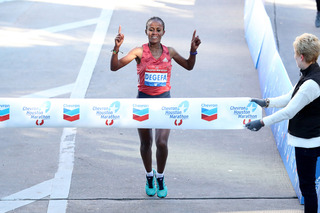 The Houston Marathon Committee (HMC) has announced the elite field for the forty-eighth running of the Chevron Houston Marathon and the eighteenth Aramco Houston Half Marathon events taking place on January 19.

The Chevron Houston Marathon welcomes back defending 2019 women’s champion Biruktayit Degefa, where she will try to become the only woman to break the tape in Houston four times. The Aramco Houston Half Marathon returns three former champions; 2018 female champion Ruti Aga, and past male winners; Shura Kitata (defending 2019 champion) and Jake Robertson (2018).

Biruktayit Degefa has an opportunity to make history in her seventh consecutive appearance – if she wins, she will be the first athlete in Houston Marathon history, male or female, to win the race four times. In 2019, she became just the third woman in race history to win three times. Degefa started running marathons at age 19, and she is one of the most prolific elite runners competing today. Over the last decade, she has run an incredible 31 marathons (she ran six alone in 2014), landing on the podium 20 times and winning eight times. She returns this year as a favorite for the title, especially on the heels of her PR in Toronto, 2:22:40, to close out 2019.

The outlier story of the 2019 Chevron Houston Marathon, Thomas Rivers Puzey returns to Houston with unfinished business. After pacing through the 30K of 2019’s race on track to run 2:14, the wheels came off for Puzey. He managed to stumble across the finish line with an official finish time of 2:20:19 and a trip to the medic. He will undoubtably again push himself to his limits.

Alexi Pappas, a 2016 Olympian for Greece in the 10,000m, arrives in Houston with a 2:43:38 marathon personal best, but possesses the talent to completely obliterate that time and run closer to the 2:29:30 Olympic standard that she needs to make it to Tokyo for another Olympic appearance. Pappas experienced an extraordinary Olympic debut performance in Rio. She set the Greek national 10,000m record and a new PR to finish 17th in 31:36.16.

In the Aramco Houston Half Marathon, Shura Kitata will look to defend his 2019 title on the heels of his fifth-place finish at the New York City Marathon just a few short months ago. He will be facing several of the same challengers from the 2019 Aramco Houston Half Marathon, so if past precedent remains the same, we are sure to see a fast and competitive race from the gun.

Jake Robertson, 2018 Aramco Houston Half Marathon Champion, returns to Houston after a troubled 2019 fighting injury and rebuilding. After winning in Houston, he went on to win a competitive Beach to Beacon 10K and finished out the year with a fifth-place finish at the Toronto Marathon in 2018 but hasn’t toed the start line in over a year. All eyes will be watching to see his return to the racing scene.

Ruti Aga returns to familiar territory in Houston as the 2018 Women’s Champion of the Aramco Houston Half Marathon. Her finishing time of 1:06:39 from the race remains her personal best. Aga is certain to be in the lead pack vying for the win once again.

The American record holder in the women’s half marathon, Molly Huddle returns to Houston and the course she set the current standard of 1:07:25 on to test her fitness going into the 2020 Olympic Trials in February.

See the latest news from Chevron Houston Marathon, Aramco Houston Half Marathon and We Are Houston 5K