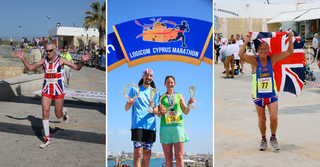 From its beginning, the Logicom Cyprus Marathon has always attracted many runners from abroad, who constantly choose to travel to Cyprus in March in order to compete in the beautiful coastal city of Pafos.

It is the most historical marathon in Cyprus and has been held every year since 1999.

Each year the attendance of overseas runners has grown. Some five years ago only around 700 athletes competed. In 2020 over 4,000 competitors will participate in the four races.

Especially, British runners favour the mild spring Cyprus climate, both for their training programmes and to kickstart their race season. The marathon attracts more runners from Britain than from any other country – both as individuals and as groups from their running clubs.

This year more than 1000 British runners are expected to line up at the start of the races on Sunday 15th March.

The other countries with high attendances are Israel, Russia, Hungary, Poland and Germany.

Notably, in recent years, overseas runners have dominated the longer distance races. Last year 42-year-old British runner Adam Holland won the marathon for the second consecutive year in a time of 2:35:03 and British woman Abi Gooch won top spot on the podium in the 2019 women’s marathon race in a time of 3:23:06.