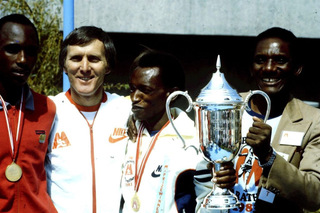 Ted Paulin with Juma Ikangaa and his Tanzanian team in 1983

The following edited tribute is taken from (2012) by Chris Muirden.

Despite not officially being named race director for the first six years of his 16-year stint in the role Paulin carried the weight of the race on his shoulders. A succession of technical directors were responsible for course logistics but Paulin was the face of the event, looking after sponsors, elite runners, prizes and the media in his role as sponsorship, publicity and promotion director.

Paulin had played football in his early twenties before taking up running at age 26. He won a series of distance races, including the Victorian Professional Marathon title seven times. He eventually became president of the Victorian Cross Country League where he met Brian Dixon and that association led to him being contacted by Dixon in 1978 when the Melbourne Marathon idea was founded.

“At the time I worked for The [Melbourne] Age in advertising. I was called in by the Minister (Brian Dixon),” Paulin said when interviewed in 2012. “We set up an office at Olympic Park. The first year was chaotic. There was no signage except for the race banner and barely enough toilets and the train service was more than half an hour late. We got better. You had to. You always had complaints. You try and explain that if 6000 people want to urinate at the same time, then you are going to have a problem.’’

Paulin was 40 in 1978, but still a handy runner. He even made it to start line and ended up finishing eighth in 2:33.37. His passion for the race, which included a leading role in bringing out Bill Rodgers in 1982 and Juma Ikangaa in 1983, was eventually rewarded by Dixon in 1984 when he was given the title of executive director.

While Paulin fought many battles over the years, one of his biggest was trying to get the committee to increase the entry fee, which was $5 for the first three years and still just $17 in 1987. “The entry fee wasn’t enough and I couldn’t talk the committee around to raise it,’’ he said. “For example, I saw the (timing) chips in Berlin way back when they came out but we couldn’t afford them. We used hand-written cards for timing in those days. It was very old-fashioned stuff.’’

Paulin tried numerous things to stimulate the race after the initial boom. He expanded the events under the race umbrella to include a women’s 10km fun run and a half-marathon series and, once age limits were imposed, encouraged a shorter Marafun race for children. He came up with the idea of rewarding 10-year runners with membership to their own elite “Spartans” club which enjoyed great success with more than 1000 members.

He was responsible for Melbourne Marathon joining AIMS in the early years and was elected to the Board of Directors at the 3rd World Congress in 1985 and as Vice-President at the 7th World Congress in 1991. He made regular trips to overseas marathons and meetings which helped him with ideas and kept him in the loop with international athletes.

Dixon was voted out as race chairman just before the 1993 race and Paulin was ousted early in 1994. “He (Dixon) still believes that I’d knifed him, but I hadn’t,’’ Paulin said. “The two key figures were Derek Clayton and (finance director) Doug Bourne. I was at the 1996 AIMS Congress in Barcelona and when I came back I was put out on the spot by Clayton and Bourne. They just came to my office in Olympic Park and wanted me to go straight away because they thought I’d take everything with me. I never had a contract. It was always word of mouth with me. I think there was jealousy about my involvement with AIMS. As soon as I was gone, they pulled out of it.’’

Paulin kept running well into his seventies and ran a gardening business from his home called Tidy Ted’s.