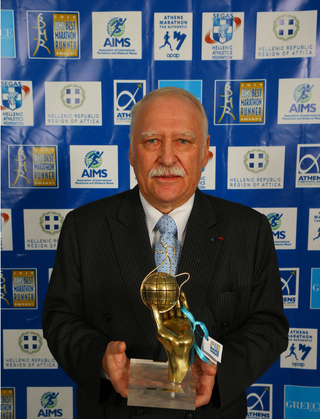 Alain held the position of deputy editor of the French sports newspaper L’Equipe between 1975 and 2013 during which time he covered 17 summer and winter Olympics.

He also worked with Canal+ in their coverage of athletics, marathons and the Olympic Games and in 2006 became President of the World Association of Olympic Journalists until 2014 when he was made Honorary President.

Throughout his career he has had many books published and been appointed to various International Olympic Committee (IOC) commissions including Anti-Doping, IOC Reform, Press, Culture and Communication.

In the early 1980s he was race director of the Paris Marathon and as such became one of the founding members of AIMS.

AIMS President Paco Borao commented: “If journalists write the ‘first draft of history’ then Alain is responsible for writing large parts of the history of our sport”.