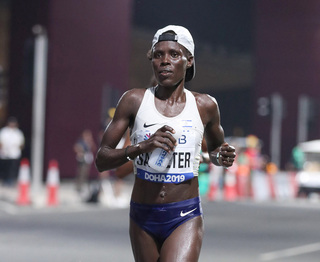 Given the extraordinary strength in depth of the women’s race, the course record could well fall after just one year in existence – and the Mainova Frankfurt Marathon might record the first sub-2:20 women’s time in its history. Four women who have run under 2:22 will be on the start line: alongside Salpeter (2:19:46) will be the title holder Meskerem Assefa of Ethiopia, who set the course record of 2:20:36 last year, the Kenyan Valary Aiyabei with a best of 2:20:53 and the Ethiopian Bedatu Hirpa (2:21:32). The latter finished third in Frankfurt last year. Another expected to produce a strong performance is the Ethiopian Megertu Kebede whose best is 2:22:52.

The men’s race on Sunday features a rare, perhaps unique contest over the marathon distance: junior against veteran or masters world record holder – Tsegaye Mekonnen against Mark Kiptoo. Mekonnen of Ethiopia has a best of 2:04:32 which means he is the fastest man in the field, while the Kenyan Kiptoo’s personal best is 2:06:00.

Many athletes competing in Frankfurt will have their eyes on the qualifying times for the Olympic Games in Tokyo next year. The target for the men is 2:11:30 and 2:29:30 for the women.

Eight men with best times under 2:08 will be on the start line which suggests yet another high quality and exciting race for top honours in Frankfurt with finishing times to match. Tsegaye Mekonnen is looking to re-establish himself with a fast time after injury problems on a Mainova Frankfurt Marathon course renowned for speedy performances. The world masters record holder Mark Kiptoo, who set an age group record here last year, should also have a say in the outcome this time. If he can match his younger rivals, his own masters world record will be under pressure.

Two Europeans seeking both big improvements on their personal bests and the Olympic qualifying times will be Britain’s Stephanie Twell (2:30:14) and the local runner Katharina Steinruck (2:28:34).