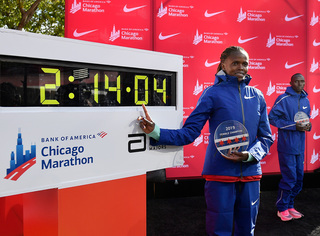 Brigid Kosgei broke Paula Radcliffe’s 16-year-old world record for the women’s marathon in the Bank of America Chicago Marathon on 13 October, winning in a time of 2:14:04.

Kosgei won Chicago last year in 2:18:35 and improved to 2:18:20 in London earlier this year. She had become the fastest ever woman at the half marathon distance only the previous month with a time of 1:04:28 – but this was not set on a record-eligible course.

“I ran here last year so I knew it was a good course,” said Kosgei. “There was a little bit of wind but it was okay. People were cheering all along the course, which gave me more energy.”