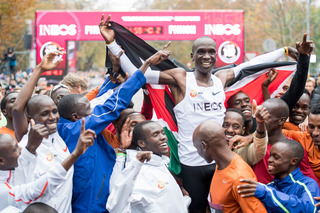 Eliud Kipchoge proved that “No Human Is Limited” by becoming the first ever sub-two-hour marathon runner in Vienna on 12 October. He ran the marathon distance in 1:59:40.2.

The 34-year-old Kenyan’s historic achievement began at 08:15 on the Reichsbrücke bridge with the temperature at around 9ºC and the wind between 0.5–1.5 m/s. The circuit was configured as a 1.5km start section and then 4.2 laps on the Hauptallee, a historic tree-lined avenue in the Prater park, selected as the venue for the INEOS 1:59 Challenge because of its long, flat straight sections and its protection from the wind.

Kipchoge ran a consistent pace set by the electric timing car and the pacemakers of 2:50 per km throughout the race. Every split was between 2:48–2:52. A group of 41 elite runners from all over the World assisted as pacemakers, with teams of seven changing over approximately every 5km. “It is a great feeling to make history in sport. I am the happiest man in the world to be the first human to run under two hours. I expect more people all over the world to run under two hours after today. I thank [the pacemakers] and appreciate them for accepting to do the job. I want to make the sport [of distance running] an interesting sport whereby all human beings can run and together we can make this world a beautiful world,” he said.

Kipchoge’s time will not be ratified as an official IAAF World record but it has shown what a human being is able to achieve when everything, down to every last detail, is planned and well prepared.