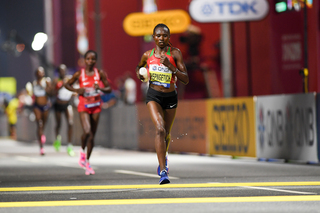 The women's marathon of the IAAF World Championships was always going to be a steamy affair. Although starting at midnight and finishing in the very early hours of Saturday morning on 28 September all medallists commented on the conditions.

Winner Ruth Chepngetich (KEN) said: “It was a tough race. I knew what to expect… I trained for this weather by running in the afternoon when the sun is up. It was not easy to run in these conditions but that gave me strength and power.”

The defending champion, Rose Chelimo (KEN), commented: “It was very hot today… I was not expecting to be silver medallist in those conditions. This marathon here was much hotter than the one I finished in Jakarta. I managed to stay there almost until the end. I did not change anything compared to other marathons regarding water supplies or so from the beginning to the end.”

Bronze medallist Helalia Johannes (NAM) said: “I have never run at such a time and in such weather. And I also have never trained in similar conditions. Especially the humidity was tough. This is the first [women’s marathon] medal for my country Namibia, this means a lot to me.”

Caution was the watchword from the start with the first 5km split taking 18:21 (Chepngetich’s winning pace, averaged out, would be 18:06 for every 5km). Nineteen others passed the mark within three seconds and continued to 10km at the same pace although the group reduced to seven. Visiline Jepkesho then pushed the pace up and five contenders reached 15km in 54:01 (17:43 5km split). The pace then dropped back (18:33, 18:27) but the effect of the conditions made itself felt upon Jepkesho, who dropped back, eventually to finish 15th. The remaining four stuck together as Rose Chelimo and Ruth Chepngetich made the running (18:12, 18:10) to 35km with Helalia Johannes and 2011 and 2013 champion Edna Kiplagat following. Chepngetich then forged ahead, running the fastest 5km split of the race between 35-40km (17:29), to stretch the others out in her wake.