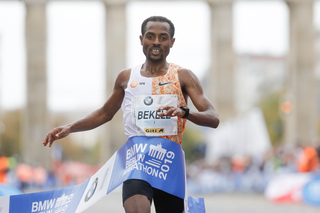 Kenenisa Bekele made a sensational return to his international best with victory at the BMW Berlin Marathon on Sunday 29 September, missing the world record by just two seconds.

For good measure, the 37-year-old Ethiopian set a national record and the fastest time in the world this year. Only his great Kenyan rival Eliud Kipchoge, who ran 2:01:39 here in Berlin last year, ranks above him in the world all-time list.

Bekele knows all too well what it is like to miss the world record by a narrow margin. In 2016 he won in 2:03:03 which was just six seconds outside the then world record. There are also historical precedents for such narrow misses in marathon history: in 1985 the Welshman Steve Jones ran within one second of the world record in Chicago.

Behind Kenenisa Bekele his fellow Ethiopian Birhanu Legese finished second in 2:02:48 to become the third fastest marathoner in history. Third place went to Sisay Lemma, running a personal best of 2:03:36 to complete the Ethiopian clean sweep. The best German runner was Jens Nerkamp who ran 2:14:54 to finish 37th.

In good weather conditions Ashete Bekere contributed her share to the Ethiopian celebrations with victory in her best time of 2:20:14, the fifth fastest women’s time of the year. Last year’s winner Gladys Cherono of Kenya dropped out at around 30km while Mare Dibaba of Ethiopia finished second in 2:20:21. Sally Chepyego, a teammate of world record holder Eliud Kipchoge, took third place in 2:21:06.

Melat Kejeta, Ethiopian-born but since March a German citizen, made a scintillating marathon debut to finish sixth in 2:23:57 and become the second fastest German woman ever in the marathon.

A record number of 46,983 runners from 150 countries entered the 46th BMW Berlin Marathon.