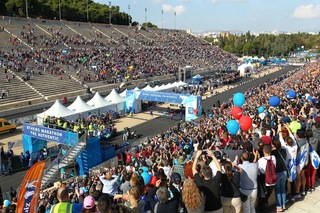 Organisers of the 37th edition of “Athens Marathon. The Authentic” expect this year for the first time to welcome 20,000 marathon runners from around the world to run on the original course from Marathon to Athens.

Almost 125 years since the first Olympic Marathon at the start of the modern Olympic era in Athens in 1896, race organisers SEGAS, the Hellenic Athletics Federation, are anticipating a new record participation.

Adding running events at shorter distances a total of more than 60,000 athletes will run through the Attica region and Athens. This record total puts the Authentic Marathon among the biggest running events anywhere in the world.

The marathon race begins in its historic setting of the town of Marathon. The marathon course of 42.195k, officially measured by the IAAF and AIMS, is practically identical with that of the 1896 Olympic Marathon and corresponds exactly to the course for the 2004 Olympic Games in Athens.

Ten years ago there were 10,000 athletes running through Athens in races of various distances, but in November this year there will be more than five times as many.

An innovation this year is that the 10k road race, which hitherto has been staged in parallel with the marathon, will now be run in the early evening on the previous day in central Athens.

The Marathon Expo where start numbers will be distributed will open on Wednesday, extending the duration of the “Athens Marathon. The Authentic“ to a five instead of four-day programme.

Together with the Association of International Marathons and Distance Races (AIMS), the Hellenic Athletics Federation (SEGAS), will once again stage a gala on Friday evening before the Marathon and an international Marathon Symposium on Saturday morning. During the course of the Gala the male and female winners of the annual AIMS Best Marathon Runner Award will be announced.

Every marathon runner who crosses the finish line in the Panathenaic Stadium on November 10 will receive the first medal of a new series. The concept for the medals covers a period of eight years and will reflect the history of the marathon race. This year’s medal will show the Battle of Marathon.