Kamworor sets new world record of 58:01 in the half marathon 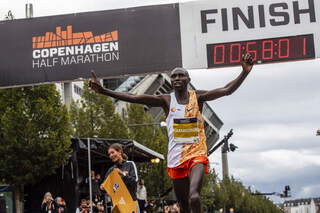 Geoffrey Kamworor set a new world record of 58:01 at the Copenhagen Half Marathon on 15 September taking 17 seconds off the 58:18 run by Abraham Kiptum in the Valencia Half Marathon last year.

The 26-year-old Kenyan returned to the Danish capital, where he won the first of his three world half-marathon titles, to run his first non-championship half marathon for almost five years.

After passing 5km (13:53) in a large group in Kamworor edged the pace up to pass 10km in 27:34 and find himself heading the field. His reaction was to redouble the effort as he forged clear with a 13:31 split for 10–15km – all the more remarkable for having to battle through a brief but heavy shower in the 14th kilometre. His time at 15km (41:05) was the fastest ever recorded for the distance.

Over the final 5km his pace dropped marginally but he passed 20km (55.00) in another “world best” before breaking the tape and the world record, 75 seconds (450m) ahead of second-placed Bernard Kipkorir.

“It is very emotional for me to set this record. And doing it in Copenhagen, where I won my first world title, adds something to it,” Kamworor said after the race.