Is running a reflection of national conditions or does it offer a platform for changing them? What happened 30 years ago in Europe’s longest-running marathon provides insight.

History in the running 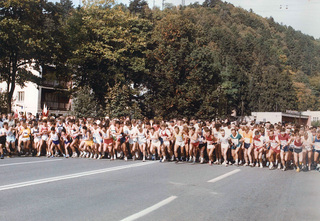 In 1989 the Košice Peace Marathon was held just a few weeks before the ‘Velvet Revolution’, which peacefully delivered radical changes in what was then Czechoslovak society.

The race also had a radical change of its own. After 63 years the course was changed from simply going out-back to the turnaround point at Seňa to a complex loop almost encircling the city. This layout, later modified and improved several times, remains the basis of the present course. A rearguard action was staged against the change – most of the more significant Marathons held in Eastern Europe countries in those (still-Soviet) days were from the city stadium along a road heading out of town to a turn point and then back again along the same route. It was a simple formula, and it was what people were used to.

Both in distance running and in wider society changes were coming thick and fast, and what people were used to was fast disappearing. The 1989 Berlin Marathon had, like all those held since 1975, been run exclusively on the streets of West Berlin. In November that year, just a few weeks after the Marathon had been held, the Berlin Wall dividing the city became obsolete as the East German authorities stood back while Berliners swarmed through it and clambered over it.

In Košice the 1989 event was only the ninth edition, of the 63 held since the first one in 1924, to incorporate a women’s race. The winner was home favourite Alena Peterková in a new course record of 2:31:28 – nearly nine minutes ahead of her North Korean competition. Her record lasted 20 years. Another home-grown runner, Karel David, won the men’s race. In an even-paced run he beat his Soviet competition by 13 seconds. It was the 12th Czechoslovak victory in the men’s race, achieved by nine different runners. A thousand people (970 men and 31 women) crossed the finish line that year.

The two home victories came against a background of historical change in the making as pressure mounted on the Czechoslovak regime to allow free movement and free expression for its citizens. After the fall of the Berlin Wall, the month after the race was held, resistance seemed futile and regime change was achieved peacefully before the end of the year.

A few months later demolition of the Berlin Wall was officially started. The 1990 Berlin Marathon became a celebratory occasion as 25.000 runners burst through the Brandenburg Gate to make the Marathon a truly city-wide event and one of worldwide significance.

The symbolic significance of sporting performance can never be quantified but may be all the more significant for its elusiveness.