City to shutdown for anniversary race 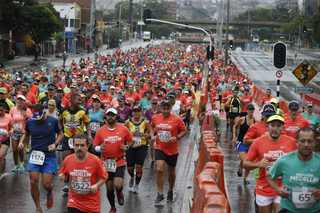 In the year 1994, thanks to the initiative of Camacol Antioquia and the Athletics League of Antioquia, the dream of a road race began in Medellín, the first in Colombia.

Today, 25 years later, the Medellín Marathon, with its four distances – 42K, 21K, 10K and 5K –has become the most important race in the country and one of the most traditional in Latin America.

For this twenty-fifth edition, on September 8, 15,000 runners from more than 262 towns in Colombia and more than 45 countries are expected.

“This Sunday, September 8, 2019 we will perform a safe and very special marathon,” said Gustavo Orozco, director of the race, to explain the preparations prepared to ensure the safety of the marathon. The operation will involve logistics personnel, police officers and more than 150 traffic agents with units that will support the route as it passes through Medellín, Envigado and Sabaneta. The main deployment will be in the streets of the race, where total closures will be mounted on the vast majority of the roads and an important medical reinforcement with ambulances, roadside assistance posts and expert personnel led by the Vigías Group and with the support from CES University.

Gustavo Orozco explained that public transport services will be limited between 05:00 and 13:00 and runners will be invited to use the Metro, reaching the finish line through San Antonio station.

In the first edition of the event in 1995, two thousand people from five countries participated – and only a 1/3 marathon was run, i.e. 14 kilometres. The 21K was added the following year.