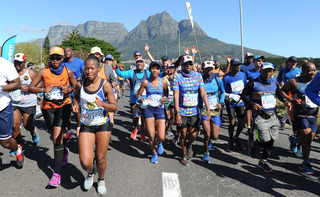 In a little under two weeks’ time, on Sunday 15 September, the Sanlam Cape Town Marathon will take place in the “Mother City”.

Race organisers have called on local residents to come out and cheer on the more than 26,000 runners in the race, which organisers say is fast becoming known as Africa’s “must-run” city marathon.

Olympic long-distance runner Elana van Zyl-Meyer, ambassador for the marathon, knows from personal experience what goes into preparation for an undertaking of this kind, and how important spectators are on the big day. “A marathon is a long personal journey. For some of us it takes sheer will and guts, while for others it’s a relative breeze. But either way, there’s nothing more energising and comforting than when you see a group of supporters cheer you on from the sidelines – it’s pure joy.”

Spectator zones have been set up along the 42.2km marathon route, giving supporters frontline views of the course action as well as an opportunity to enjoy live music and dance, and suppo. Some of the zones are co-hosted by local charities involved with this year’s event.