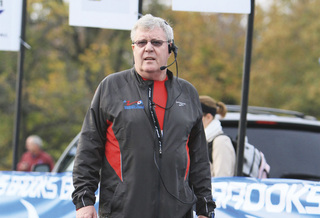 Jim Ralston, who passed away on 23 August 2019 at the age of 70, was for many years the race director of the Niagara Falls Marathon. As such, along with his wife Ruth, he mounted a successful bid to host the 14th World Congress of AIMS at the Sheraton by the Falls Hotel in Niagara Falls, Ontario (CAN) in October 2002.

He was prominent in helping many other races in the local area and developed many friendships within AIMS through his regular attendance at AIMS Congresses right through from the 12th Congress in Turin (ITA) 2001 to the 20th Congress in Durban (RSA) 2014.

Originally from Scotland, Jim migrated to Canada at the age of 21. He settled at Niagara Falls and threw himself into voluntary work in support of the local community. He was an active sportsman and a particularly keen runner and member of the Niagara Track Club. His athletic interests gradually evolved into a second career as race director of the Niagara Falls Marathon.

Both Ruth and Jim regularly helped their close friends Les and Buffy Wright at the Lake Tahoe Marathon and often came to Maui to assist with the Maui Oceanfront Marathon.

Jim fought and survived prostate cancer back in 2007 and more recently had a heart valve replaced. He died on 23 August 2019 from a heart infection and kidney failure.