Special atmosphere not to be missed 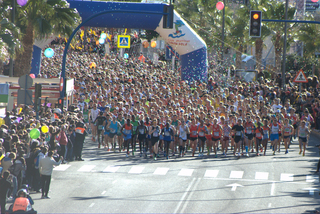 Santa Pola is a beautiful touristic fishing town located 17km south of the city of Alicante and only 10km from the international airport. There are direct flights to many European countries. In Santa Pola the natural landscapes, beaches, and local cuisine combine to offer you an unforgettable stay.

Must-see attractions are its Fortress located on the Glorieta Square, the natural salt marshes or “Salinas” where flamingos and black-winged stilts can be seen, the Sea and Fishing Museums, the Salt Museum and the Aquarium.

In 2017 the International Half Marathon of Santa Pola was ranked fourth by the Spanish Federation of all half marathons in the country. It is an IAAF Bronze label race and in 2016 incorporated the Spanish half marathon championships.

The first race in 1990 attracted only 324 runners but by 2016 there were 9260 registrations. From the start the Santa Pola Running Club has always strived to offer a joyful experience, as well as to provide the very best race services including healthcare and massage and help with finding accommodation. It has also taken advantage of technical innovations such as a giant screen at the finish, live transmission of the event, broadcasting on the Spanish sports channel Teledeporte, the bib timing chip, mobile app and a full runner bag.

Runners have always valued the way the Santa Pola race and the whole town takes care of them and this is what brings them back to Santa Pola on the last but one Sunday of January – year after year.
The hopes, enthusiasm and sheer hard work put in by the Santa Pola Running Club generates an atmosphere that you can feel during the entire week-end which rubs off on the runners and makes the race so special. The whole town is there to support and encourage runners in their efforts with endless applause. The weather is unfailingly good: it rained only once out of 28 races). The course is practically flat and is 80% beside the sea (the men’s course record is 1:00:14).
The runner bag contains a high-quality JOMA Technical T-Shirt, a towel, a finisher’s medal with ribbon, a commemorative book and the traditional salt packet. There are 10 live music points along the course featuring rock bands, batukada and dulzainas, etc. Refreshments are offered every 5km as well as in the finish zone with food and fluids, fruits, etc…

The Santa Pola Running Club is a non-profit organization that, in line with its social responsibility policy, gives a part of its proceeds to NGOs. It is also an environmentally-friendly event: water bottles used during the race are recycled along with all the waste generated.

Race weekend in Santa Pola is a great running celebration that should not be missed: Before the race there is a runners’ expo, a free children’s Mini Marathon for all categories, live music, bouncy castles, etc…

We invite you to come and be part of our race.