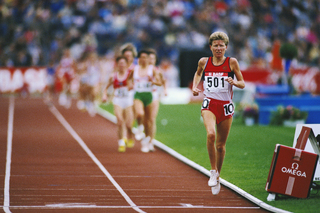 In the 1980s Ingrid Kristiansen dominated all forms of women’s distance running: on the track, over cross-country and on the roads.

Only her compatriot Grete Waitz could rival her, and this drove both of them to ever greater efforts. Waitz was a couple of years older and had enjoyed great success at cross country and on the track before Kristiansen, who started her athletic career as a cross-country skier, had got into her running stride.

Born on 21 March 1956 with a differently-spelt surname of Christensen she started running marathons in 1980. At first her performances were unexceptional. It took until 1984 for her to go under 2:30 in the Marathon, although she won Stockholm three times and finished second in New York and third in the 1982 European Championships.

It was after giving birth to her first son in 1983 that Kristiansen returned to competition at an altogether new level. She ran three marathons in 1984, winning Houston in 2:27:51 (a year earlier she had won it in 2:33:27), and London in 2:24:26. Her third outing that year was in the 1984 Olympic Marathon in which she finished fourth (Waitz took the silver medal).

1986 was better still starting with victory in the Boston Marathon and followed by two track world records: 30:13.3 in the 10,000m (which stood for 16 years) and 14:37.89 in the 5000m. This made her world record holder at all three Olympic ‘long distance’ races at the same time – the only person ever to do this. She took the European 10,000m title with a devastating run that left her nearest rival 40 seconds behind. She closed the year with victory in the Chicago Marathon.

At the beginning of 1988 she won the World Cross Country Championships after having previously twice finished third and once fourth. She ran the first half of the 1988 London Marathon at 2:18 pace but slowed to record 2:25:41 – still five minutes ahead of the second woman. She led the 10000m field at the 1988 Seoul Olympics but dropped out with a foot fracture.

Kristiansen retired from active athletics in 1993 but continued her involvement in the sport through coaching, administration and personal appearances. She was the first awardee of the AIMS Lifetime Achievement Award in 2015.