Atlantic surf and beaches are never far away 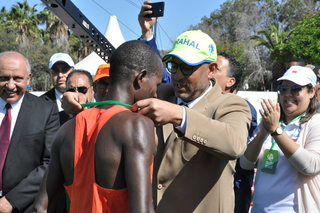 The city of Agadir lies on the Atlantic Coast, 500km south-west of Casablanca. It is home to nearly 500,000 inhabitants and hosts a relatively young Marathon event.

Organisers are preparing to hold the sixth edition on 22 December. Moroccan and international elite athletes have already confirmed their participation and a total field of around 6000 is expected. Around a dozen countries are usually represented, including Kenya and Ethiopia.

The local economy depends heavily on tourism, supported by fishing and agriculture. The Marathon was founded partly with the aim of supporting the tourist industry by attracting foreigners – especially from a winter-bound Europe – in the ‘off’ season. The course was designed with the aim of showcasing the city and this applies to the Half Marathon and seven-kilometre fun run as much as it does to the title Marathon event. The Atlas Mountains provide a scenic backdrop and the Atlantic surf and beaches are never far away.

The International Green Marathon of Agadir is the first of its kind in Morocco and the only one in Africa which specifically promotes the environment. The three principal objectives are to promote sports tourism, to protect the environment – including the designation of a car-free day – and to combat drug addiction among young people.

The marathon is enhanced by parallel activities for protecting the environment. Participants are provided with 100% organic food, green-coloured T-shirts as a symbol of nature and medals representing the Argan tree, the symbol of the region.

The International Green Marathon of Agadir is sponsored by RBM Sports, the Regional Council of Souss Massa, Agadir Territorial Commune, the Rahhal Group and many other local, national and international partners.