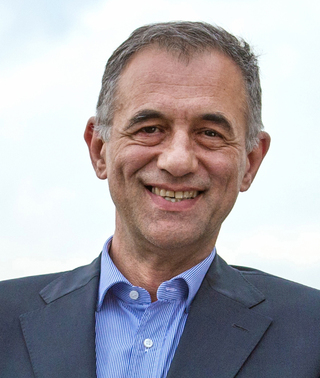 Carlo Capalbo, a lawyer by training and an entrepreneur by inclination, moved from Milan to Prague in the early 1990s and saw a country ready to join the running revolution. 25 years later 1.2 million runners have completed races established by him and his team.

Capalbo’s professional career started in the IT industry with Olivetti Spa in Italy, where he was involved in international finance and the market development of new start-ups worldwide. In 1988 he joined the WordPerfect Corporation, becoming country manager for Italy and regional manager for other European countries.

In the early nineties Carlo moved to Prague, curious about changing openings in “New” Europe. He started a management consulting firm specialising in helping medium-sized European companies find entry into the Czech Republic. That was what led him to spot the potential of a country that had until then seemed unmoved by the new running culture that had gripped Western Europe.

In 1994 he founded the company Prague International Marathon spol. s r. o. (PIM) as a green-field project aimed at establishing the modern concept of long-distance running events. He positioned the company as an innovative communication tool for brands looking to enter or consolidate their position in the Czech market

The first Prague Marathon was held on 4 June 1995 and attracted 958 runners with a further 15,000 people taking part in the accompanying events. Olympic champions Emil Zátopek and Gelindo Bordin were race patrons. PIM expanded quickly: the Prague Grand Prix 10km race for elite runners was established in 1996, followed by the Junior Marathon – a relay race for secondary school students in 1997, and in 1999 by the Prague Half Marathon.

In 2000 he founded Tempo Team Prague, s. r. o. an agency consisting of a team of professionals committed to consulting, sharing experiences and providing services to other long-distance running events in Europe and around the world, as well as to other sporting institutions. In 2009 he was elected to the Board of AIMS with responsibility for marketing.

In June 2010 another important landmark event was established when Carlo and his team staged the Olomouc Half Marathon, taking mass participation running outside the Czech capital for the first time. The City of Olomouc showed its appreciation by bestowing an award on him for the “Act of the Year”.

In May 2012 Prague and the PIM team hosted the 19th World Congress of AIMS, which attracted a larger attendance than ever before in the 30-year history of the Association, bringing together over 240 delegates representing 122 races from 55 countries on seven continents.

The Prague Running Mall was created in 2013 as a unique focus for runners in the city which became an example followed all over the world by other race organisers and became an inspiration for adidas Runbase. In 2014 Carlo received the European Athletics Member Federation Award for his contribution to sport in Europe.

RunCzech events enjoy long-term sponsorship by some of the largest and most famous companies in the world: Volkswagen, adidas, Hilton, Mattoni, Pilsner Urquell, Generali and Unicredit. The atmosphere of the races has also drawn many renowned names to the Czech Republic such as Haile Gebrselassie, Stefano Baldini, Paul Tergat, Moses Tanui, Antonio Pinto, Patrick Makau, Zersenay Tadese, Wilson Kipsang, Edna Kiplagat, Geoffrey Mutai and Mary Keitany, as well as countless thousands of visitors.

The RunCzech Running League, with over 85,000 runners, consists of seven races each with its own IAAF Gold Label. No other organiser in the world has received more, which attests to the first-rate standards of the organisation.

In 2015 Carlo received a badge of honour “Cavaliere dell’Ordine della Stella d’Italia” (Knight of the Order of the Star of Italy). The award is one of Italy’s highest honours given to those personalities who promote friendly and cooperative relationships with other countries. He was also appointed as Chairman of the IAAF Road Running Commission.

In 2016 he launched a new project – Napoli Running – aimed to promote two existing races in the Campania region – Sorrento Positano (held in December) and Napoli City Half Marathon (held in February).

In 2017 six world records were set in RunCzech races. Besides events in Italy Carlo has started races in Kenya and consulting services in Japan and China.