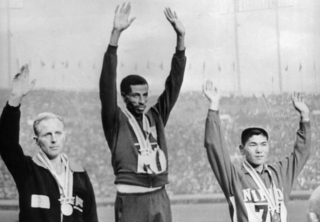 The three winners of the marathon event at the Tokyo Olympics stand side by side on the rostrum, 23rd October 1964. From left to right, they are Basil Heatley of Great British (silver), Abebe Bikila of Ethiopia (gold) and Kokichi Tsuburaya of Japan (bronze). Bikila also set a world record of 2 hours, 12.11 minutes. (Photo by Keystone/Hulton Archive/Getty Images)
© Getty Images

Benjamin Basil Heatley was a British runner who mainly competed in the marathon. Born in Kenilworth in the English Midlands he competed for the renowned club Coventry Godiva.

He filled the void left by the retirement of Jim Peters in 1954 and before Ron Hill and Heatley’s clubmate Bill Adcocks had seriously tested themselves at the Marathon. Hill finished 17 places behind Heatley in the 1964 Tokyo Olympic Marathon while Adcocks only made his debut at the distance that year.

On 13 June 1964 Heatley broke the world record for the marathon on the famous Polytechnic Marathon course from Windsor Castle to Polytechnic Stadium in Chiswick, West London. His 2:13:55 surpassed Buddy Edelen’s (an American runner long resident in UK) world best from the previous year’s race by 33 seconds.

Four months later, on 21 October 1964, Heatley ran in the Tokyo Olympic Marathon – where defending champion Abebe Bikila won another Olympic gold medal in another world record time (2:12:11). Heatley managed to stay close to Japan’s Kokichi Tsuburaya and came past him on the stadium track to win the silver medal, equalling the highest-ever placing by a British runner in an Olympic Marathon.

He maintained an interest and a presence in British athletics throughout the rest of his life and in 2014 was invited to Japan as part of the 50th anniversary celebrations of the Tokyo Olympic Games, where he met with the family of Abebe Bikila.