A historical site and an exhilarating race

Unique in the world 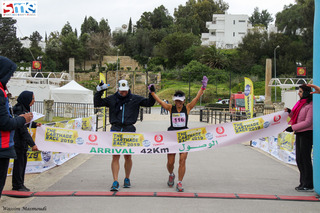 “It's the most beautiful marathon of my life. I’ve never felt so much human emotion: the encouragement from Tunisians, the support from volunteers… I ran freely, in peace and security,” enthused one runner from the USA.

“Carthage is magnificent, a course where time stops”; “I will be back next year”; “What beauty, what a beautiful country”; “Carthage is unique in the world, I have never seen a landscape as rich in history”. Testimonials flowed free and fast from the finishers.

Carthage has a unique history: come here to run and discover a historical site, a millenary city, a unique new race in the world. Welcome to Tunisia, Ahlan wa Sahlan in Carthage.

The Carthage Race Marathon is contained within a restricted perimeter which requires it to be a lap course. Three distances are offered: Marathon, Half Marathon and 10km. All are officially measured, certified and timed using the ChronoSports Race Result timing system.

The courses of the various races each allow runners to discover or re-discover the wealth of the archaeological heritage of Carthage and the authenticity of its environment. The courses are very ‘green’ and at the highest point offer a 135-degree panorama of the Mediterranean Sea. This point is located near the Great Mosque Malik Ibn Anas and the Cathedral Saint-Louis, built in 1890 in honor of Saint Louis who died in Tunis in 1270.

The show starts as runners pass by the Roman Theatre (selected as the start location) and other major monuments of Carthage: the Mosque Malek Ibn Nas, the remains of the Basilica of Damous El Karita, the mythical village of Sidi Bou Saïd, the tanks of La Malga (a UNESCO World Heritage Site) and the passage in front of the Presidential Palace.

The Carthage Race Marathon is the first genuinely international running event in Tunisia. Thirty-two nationalities were represented including many from European and North African countries but also from as far afield, Ethiopia, Kenya, Russia, United States, Canada, Iran, India and Japan. All runners received a T-shirt and designer finish medal as a unique reminder of their Carthage Marathon experience.

The Carthage Race, first launched in 2015 was exceptional in aspiring to be a world-class marathon of the highest level. The “Triple 7 Quest” brought in runners from around the globe seeking to run seven official marathons or half-marathons on seven continents in seven days. The Quest starts in Australia and finishes in Antarctica and in 2015 included events in Melbourne, Abu Dhabi, Paris, Carthage, New York, Punta Arenas and Antarctica. Fifteen Guinness World Records were set. It was a unique moment and the support of all Tunisian Authorities showed Tunisia as a great African and Mediterranean country.

Naamen Bouhamed, a Franco-Tunisian who built the Sports Med Events in Tunisia, said “After launching the Sfax International Marathon of the Olive Trees in 2012 – the first AIMS-IAAF certified course in Tunisia – we now stage three AIMS races: The Carthage Race Marathon in February, the Tunisia Women’s Run Half Marathon, held in Sousse in April, and the Sfax Marathon in October.”

Information and registration at: www.sportsmedevents.tn